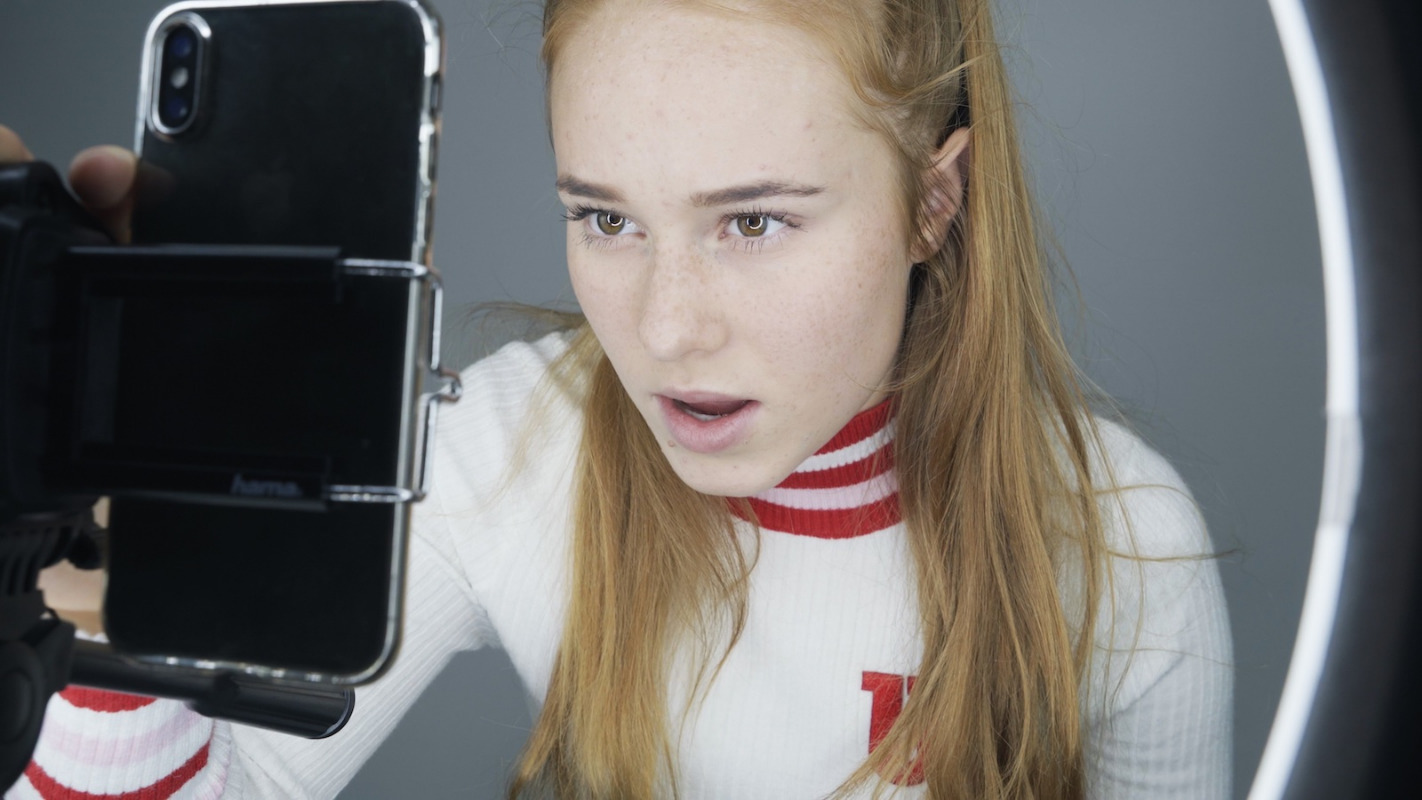 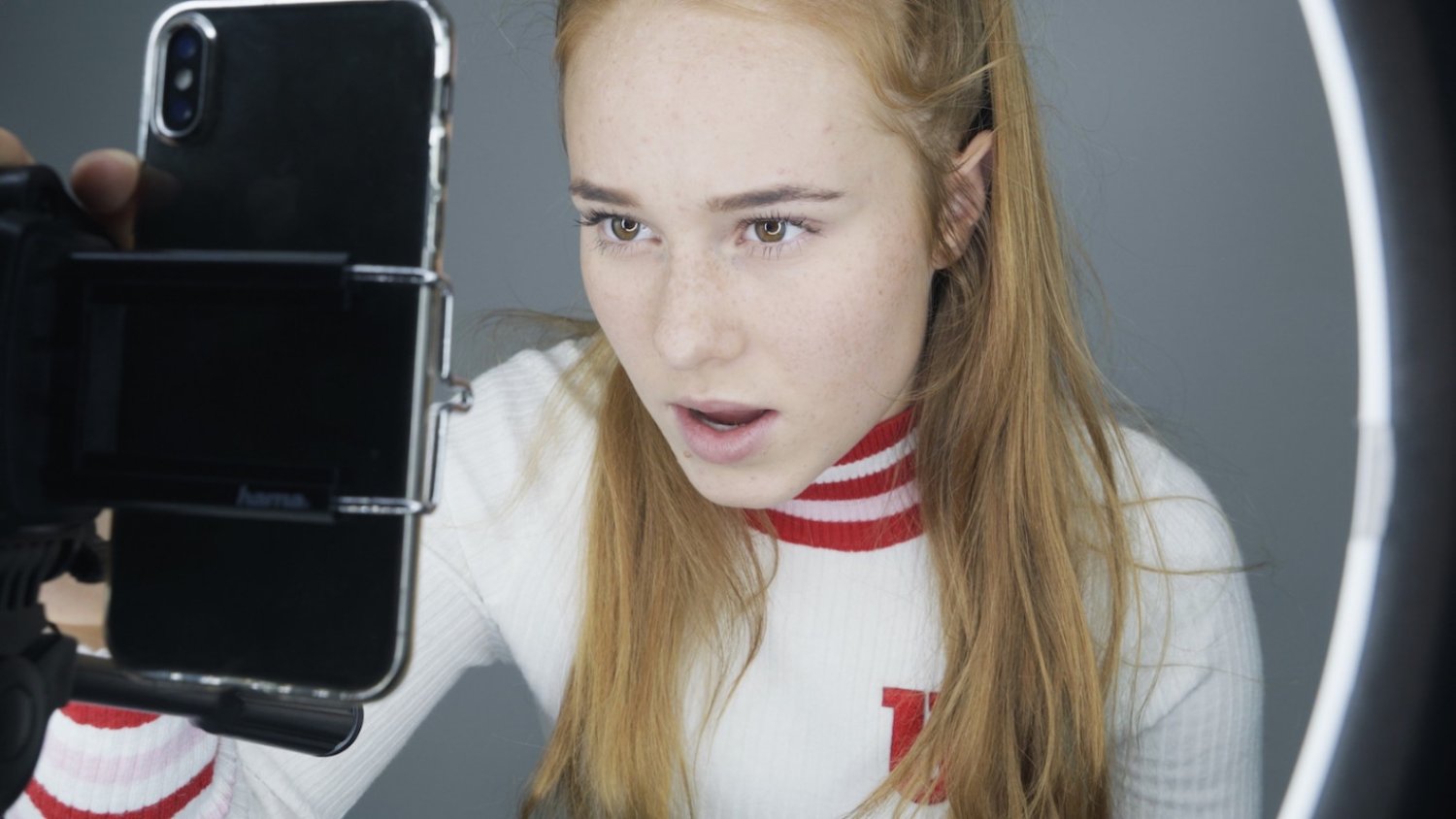 […] One of the most fascinating aspects of the influencing phenomenon is the constitution of the fan. Classic fandom for bands, musicians and actors relies upon a non-reciprocal exchange between the artist idol and their fan.

[…] Meures is able to capture in Leo something beyond her comprehension: the tangible impact and power of the black mirror where all those “likes” are embodied in the throbbing squeal of an identifying mob wanting to be her. Leo’s reflection in the mirror is serious.

@leoobalys is described by one of her most dedicated “fan girls” Melanie, as «pretty, funny and cool [gang!]». A conduit for fashion and beauty tips, Leo pushes products for a pantheon of brands which advertise through her growing fan base on Tik Tok, YouTube and Instagram. They are the main platforms where she has managed to capture the hearts, and sometimes derision, of her 1 million (now at 1.6M) followers with overly buoyant, fast-paced talking and exaggerated lip-synched dances; all which last no longer than 30 seconds. These twice daily posts, aimed at grabbing the attention of the premenstrual teen (or “tweenie”) are only the tip of the production iceberg that cinematographer Susanne Regina Meures (Raving Iran, 2016; Saudi Runaway, 2020) delicately reveals through her absent-like presence in the home of the Balys family.

Filmed over 4 years, Meures is clearly interested in the processes of making and the modes of production behind a successful influencer. She makes a point of showing us the non-negotiable commitment, hard work, creativity, logistics and technical understanding that goes into making these fleeting “seconds” twice per day, every day without respite, as “authentic” as possible. Unlike “show business”, the self-made star perpetuates and sustains themselves through the parasitic powers of product alone; it’s the only means by which an influencer can commit to their labour, increase their net value and – in a weird twist of celebrity – inflate their fame.

Screens everywhere in everyone’s hands. Phone cameras, or camera cameras capturing images, live and still, moving to feed and placate the never satiated platforms. Grabs of footage, sometimes just for now or for «everyone to see forever». A circular hollow frame emits a soft glow of light from its thin fluorescent tube, surrounding a phone held steady by a multi-jointed stand. This is Leonie’s portal for sharing her world with followers in those few migratory seconds. We are told in the opening moments of the film that it is her “black mirror” and when these young girls look into their black mirrors they will find their identity, because she will give them one.

One of the most fascinating aspects of the influencing phenomenon is the constitution of the fan. Classic fandom for bands, musicians and actors relies upon a non-reciprocal exchange between the artist idol and their fan. The artist gives to the One, a conglomeration, in singular terms. The fan pours love and attention with cathexis back in extreme proportions, satisfied with their anonymity. In the social media space, fanaticism flows in a similar way, but the intimacy is increased through frequency and proximity of exchange. Leo stares into the camera like she is speaking and looking only at you; all is packaged close and compact. Any fourth wall of performance is shattered, opening up the possibility of friendship through the intermediary of telematic device.

Meures is alert to this, and the inclusion of Melanie raises many questions as to the social health of young people often spending up to 17hrs on their devices a day. Confusing their fandom with friendship, or substituting friends with an icon, Meures gently shares Melanie’s fears, frustration and disturbing obsession without critique, but we are no less struck by the severity of attachment brought about by that little black mirror. Something akin to the hikikomori syndrome where mostly young Japanese men withdraw into a self-isolated, technologically dominated world, sometimes starving to death.

And yet, there is a further interesting feature of the YouTuber/influencer when it comes to face to face “meets” with their followers in brand marketing shopping centre events. Beatle Mania erupts in the tween-teen crushes of thousands screaming, crying and fainting to catch a glimpse of their idol. Here, one is also physically at risk. Meures is able to capture in Leo something beyond her comprehension: the tangible impact and power of the black mirror where all those “likes” are embodied in the throbbing squeal of an identifying mob wanting to be her. Leo’s reflection in the mirror is serious.

The question of Leo’s “authenticity” is raised rather insensitively by a consultant and it is this moment that Andy and Sani, her parents, step in to manage her potential million dollar worth. Meures’ other keen interest beyond the machinations of making appears to be motivation. Andy and Sani’s transformation becomes the most interesting as they vicariously buoy the dreams of their only child with an enthusiasm and justification that outstrips any recognition by Leo for why she wants it so badly. We see Andy take his first selfie, clumsily working the features of his phone with excitement. By the end of the film, he and Sani have the technical know-how and conviction to become influencers themselves. For Sani it is driven by fear and a need for security; for Andy it is the apogee of freedom to self-create one’s entire life having grown up behind the Wall. Over the course of the four years, we witness them entrenched as slaves to Leo’s every mean whim; they are mere «prisoners in her dream», as awkward as the tangled ribbons attempting to ground and steady the helium filled balloons which signal her growing success.

Meures’ lens also follows Leo with a scrutinising curiosity. We are not only invited backstage to simply observe, we are deftly moved as she scrapes back the branded veneer and theatrics to penetrate the person. Authenticity is at its sharpest with Melanie’s first meeting of Leo, the truth and vulnerability of her devotion devastating, and also when we feel the immovable density of teenage-hood as Leo loafs about without apology.

I can’t help but become incensed by the magnitude of influence promoting cosmetics and fashion that is no doubt produced from ethically dubious supply chains. With all that celebrity surely one must feel the responsibility to use it beyond lining one’s own pocket. Meures is respectful and balanced toward her subjects, ultimately leaving it up to us to critically ponder whether «we wouldn’t wish a life like» the Balys’.

The Kunsthistorisches Seminar and the Seminar für Medienwissenschaft of Basel University, in ... 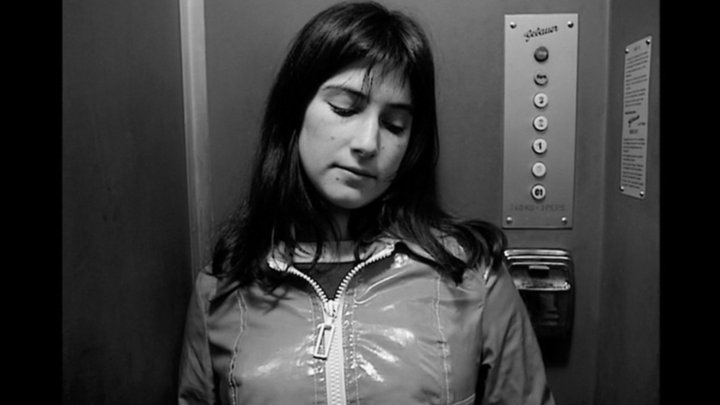 […] This prismatic multiplication of roles is able to highlight an interesting social ... 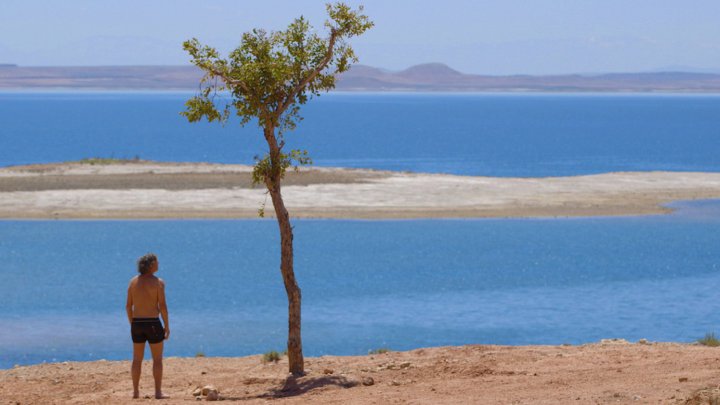 […] Serebrennikov’s craft is superb throughout. The plastic, overflowing there-ness of the ... 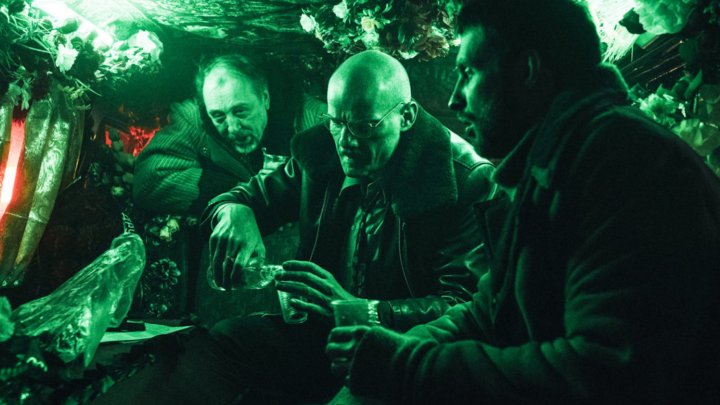