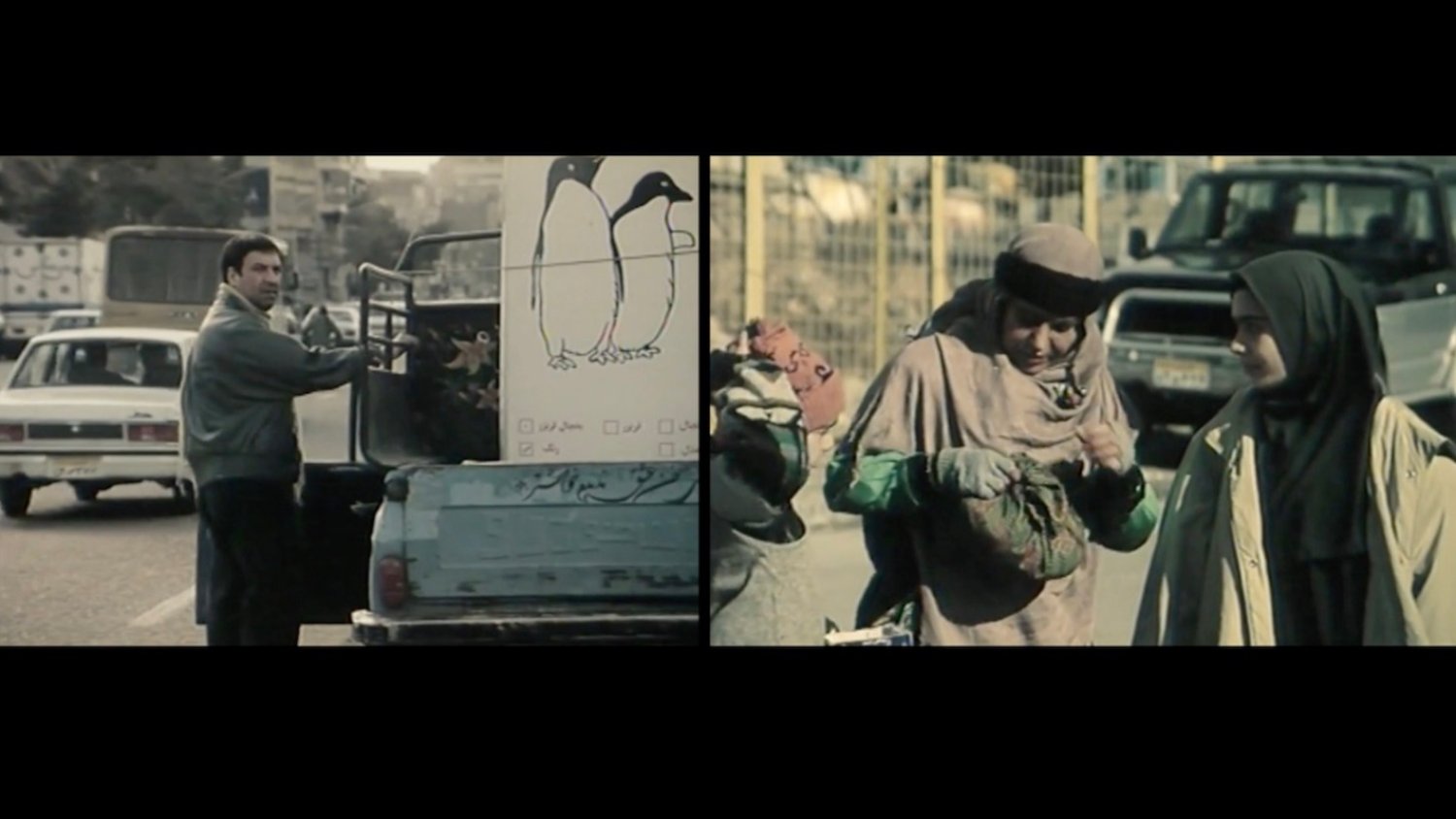 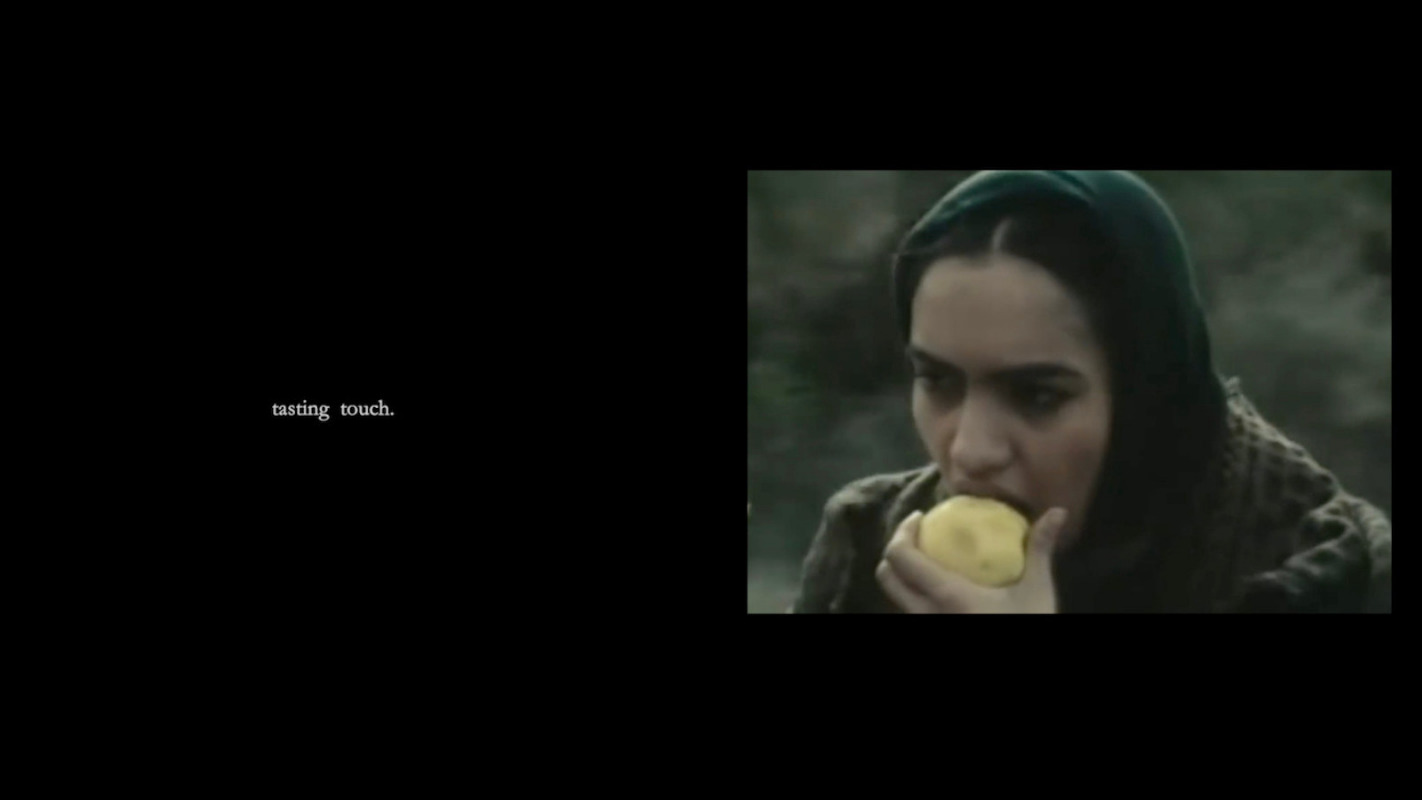 Curator's note: The following essay was written to accompany the online screening of Nazarbazi by Maryam Tafakory for the fifth episode of the Video Essay Gallery. Due to a change of circumstances in the circulation of Nazarbazi and Irani Bag, Irani Bag replaces Nazarbazi in the program. While the original essay was written for Nazarbazi, it also addresses Irani Bag as well as the state of precarity that presently affects the circulation of both films. The essay remains here to account for a film in its unfortunate absence, and to further address the question raised in its final sentence: «what depth can be perceived in things that can’t be seen.»

Nazarbazi (2022) is translated in English as “play of gazes”, which leads me to think of the many gazes at play in and around Maryam Tafakory’s short film. It starts with the splendid array of looks between men and women that Tafakory has compiled from post-revolution Iranian cinema, an era in which depictions of physical touching between the sexes are forbidden. As demonstrated in Nazarbazi, and more centrally in its precursor Irani Bag (2020), absence of physical touching draws more attention and dramatic tension to other forms of interaction: the proximity of bodies to one another, characters’ gazes at and between each other, and the passing of objects that serve as a proxy for direct contact. Iranian cinema has long been celebrated for its artists’ ingenuity in working within prohibitive codes to devise a rich and subtle cinema of the unsaid, the unseen, the untouched. Nazarbazi summarizes these poetics in an onscreen text: «In order to show you where your desire is / It is enough to forbid it to you a little.»

The film’s montage of poetic cinema is accompanied onscreen throughout by pithy, evocative texts, in both Farsi and English, that serve as a steady reflection running in parallel with the images, never quite commenting directly on them, but alongside them. This text brings to mind my first acquaintance with Tafakory, when she was introduced to me by videographic scholar Catherine Grant, who also served as an examiner for Tafakory’s PhD dissertation. Grant’s own use of epigraphic on-screen text in many of her videos provided a crucial model for the first wave of videographic film scholars who sought to transition their text-based scholarly practices into an audiovisual medium. I haven’t read Tafakory’s dissertation but its title, The zina of the I/eye: accidental findings on touching and prohibition, has a clear thematic connection with Nazarbazi, and brings to question how the film could be understood within the context of academic scholarship and videographic research.

The texts in Nazarbazi which, according to the end credits are sourced from the likes of Forough Farrokhzad, Ahmad Shamlu, Adonis, Roland Barthes and Jacques Derrida, appear in terse, epigraphic form and provide thematic and poetic counterpoint to the images. Simultaneously, they appear without attribution and intermingle each other and with original texts by Tafakory. Unlike conventional academic scholarship where references are clearly acknowledged and demarcated, here they exist as an undifferentiated organic whole. What affordances does this organic poesis have for academia? With Nazarbazi, onscreen text becomes a site for another play of gazes, between videographic scholarship and video art and the question of how much these practices could possibly share the same gaze.

That common gaze may be found insofar as visual scholarship and artistic practices are grounded upon the act of viewing. As I watch Nazarbazi’s stunning arrangement of footage compiled from nearly 90 films, I become sensitive to Tafakory’s spectatorship, especially as a function of time. The film reflects decades of watching these films throughout Tafakory’s life, as well as her re-watching them to transform their hundreds of hours of footage into a singular expression. And then there is the historical time of when this film was made, a pandemic when the dictum of no touching was applied not just to Iranian filmmaking but to everyday living across the world. Covid-19 is never mentioned explicitly in Nazarbazi but I feel it as a strong subtext, in text like this:
«it is precisely here / that the disaster commences: / to enter into oneself /and wander / in the realm of darkness»

Or maybe the Covid-19 subtext is informed by my consultation with Tafakory during a pandemic-era project initiated by the Asian Film Archive. In 2020 they commissioned video essays from several filmmakers for their website while they suspended their theatrical programming. Tafakory’s contribution, Irani Bag, is a more analytical and straightforward work than Nazarbazi, focusing specifically on objects as facilitators of touch between Iranian movie characters. It is fascinating to see some of the material reappear within the more expansive and intensively developed Nazarbazi. The difference between the two might also be a measure of Covid time, a time of going deeper into the materials at one’s disposal when so much else had been rendered inaccessible.

It’s worth noting that Irani Bag is currently not accessible on the website that commissioned it. In one screening and Q&A event I recall Tafakory expressing concern about what questions she would be asked about her work, and what consequences her answers may have back home. That memory lingers over my present task in making sense of contradictions that must be acknowledged around works such as Irani Bag and Nazarbazi. These works have screened at many festivals to great acclaim, but their visibility is not to be taken for granted. They demonstrate immense care to what is shown and not shown, address a policy of cinematic censorship with resourceful euphemism, and honor the creativity that arises in the face of such policies. And even still they risk repercussions.

I am left reflecting on my own gaze, and to what extent it can share the gaze of Nazarbazi and its author. To what extent is it bound to impose its own associations about Iran, cinema, feminism and the power of the audiovisual essay? What would it mean to desire a future in which Nazarbazi could be screened openly? Or to wish for a society in which films don’t have to be made in the discreet ways that Nazarbazi so lovingly pays tribute? As a form that has promised greater accessibility for people to engage with ideas audiovisually, the video essay has been a significant marker of a digitally connected, hyper-mediatic era marked by ever-increasing ease of visual expression. What Nazarbazi makes visible is the beauty of un-ease in presenting a world of things that can’t be shown, and what depth can be perceived in things that can’t be seen.