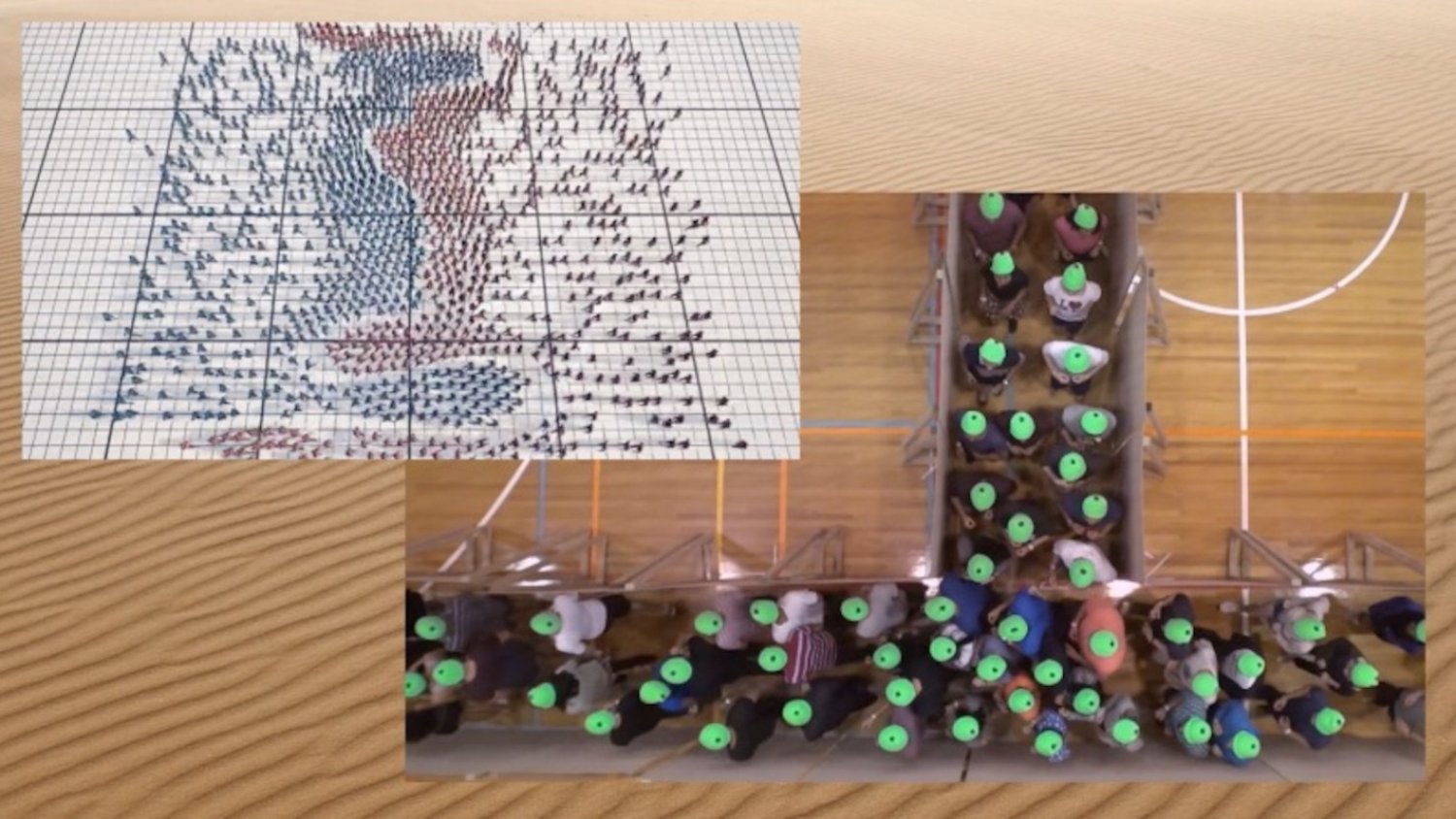 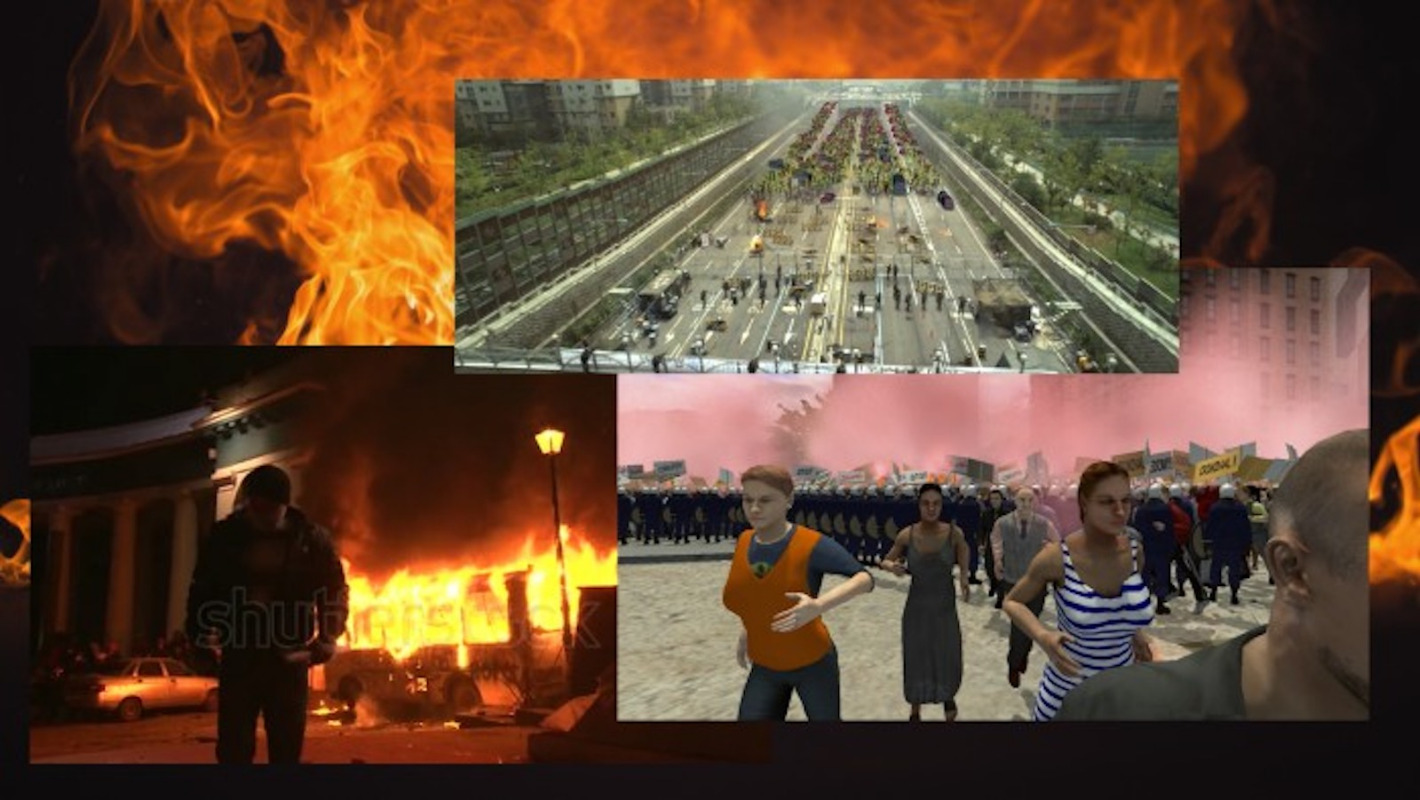 How did we get from Woodstock to Shutterstock? I don’t know if Clemens von Wedemeyer intended to provoke this wordplay but it’s what comes to mind while watching the first minute of his video essay Transformation Scenario. A series of stock footage clips of banal interactions between corporate types transitions into documentary footage of the legendary countercultural music festival that attracted nearly half a million people. «Woodstock was a major event in the perception of being part of a bigger group», says a middle-aged male voice from offscreen. He is in dialogue with an offscreen female voice who observes that there are now tools that could count every head in the crowd. The 60’s idealism of transformational mass gatherings has given way to a new transformation of the masses: crowd surveillance and predictive computational modeling produce a society as safe and pre-scripted as stock footage.

Von Wedemeyer weaves a dense exposition using clips from eight films, 50 YouTube videos and assorted Shutterstock footage. The clips rarely fill the screen but overlap in a soft montage assembly, forming a loose chain of associations. Upon my first viewing, one section that stayed with me showed how crowd scenes in movies have changed from using hired extras to incorporating CGI simulations as a way to minimize production costs and risks. While it’s no shock that the movies would follow the trajectory of digitization that has transformed other industries, what struck me is not only that the image of the crowd has become digitized, but that this simulacrum of mass gathering has become aesthetically normalized. As fictional images of crowds become more commonplace, I wonder if future images of crowds populated by actual people will become the stuff of legend, not just in films but in the real world. As the male voice observes, «The background of a film scene is a test bed for society».

Transformation Scenario delves into the world of the digital masses by resourcefully amassing dozens of examples of digital crowd modeling and simulation videos found on YouTube. One video filmed from overhead shows dozens of people wearing green helmets, jostling in a narrow space, exposing the human labor that goes into the generation of crowd behavioral data. What is the significance of crowd labor in real life scenarios? Another scene shows a crowd of screaming shoppers rushing into a department store as it opens, only to be juxtaposed with a computer simulation of a political demonstration. «It’s rational to automate some social routines», asserts the female voice, who promotes techno-determinism to her more skeptical male counterpart. Will future citizens outsource their protests to the virtual sphere so that they can focus on their leisure? Would this even guarantee a stability of societal operations? The store footage reveals a breathtaking quality of violence in consumerism, as if its energy were so immense as to topple the system meant to contain and exploit it.

The interplay between human reality, whether scripted or computational simulations, and the moving image gets stranger still: one visual triptych juxtaposes movie production footage of a protest scene mixing human and computer-generated protestors, a computer simulation of a mass uprising, and Shutterstock footage of a protester throwing a Molotov cocktail. All three convey a persistent need to create an image of unrest, while pointing to different resources and applications for doing so: as blockbuster entertainment to experience revolt in safety; as social modeling tool to prevent unrest, or as off-the-shelf footage to express one’s own transformative visions for society. Perhaps Shutterstock could lead to another Woodstock.