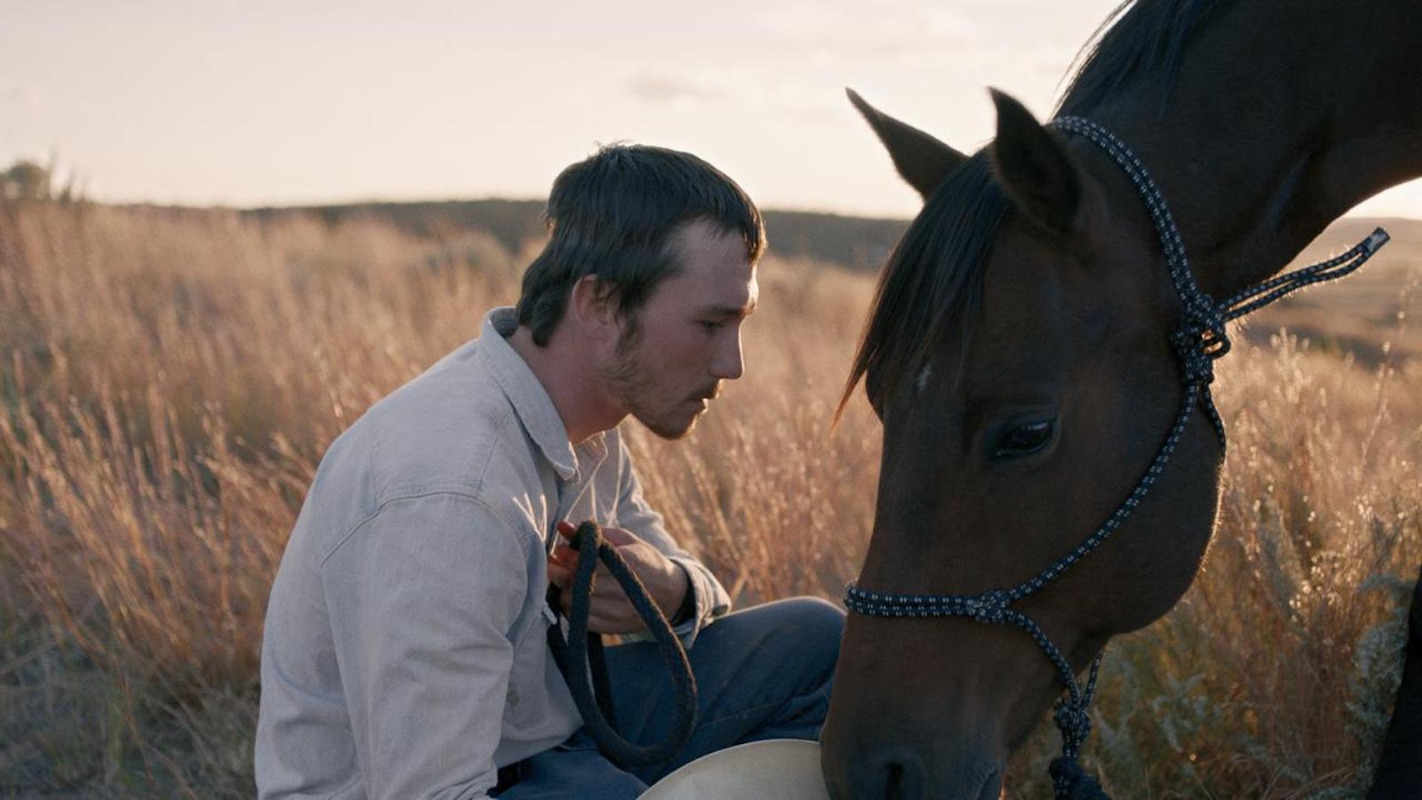 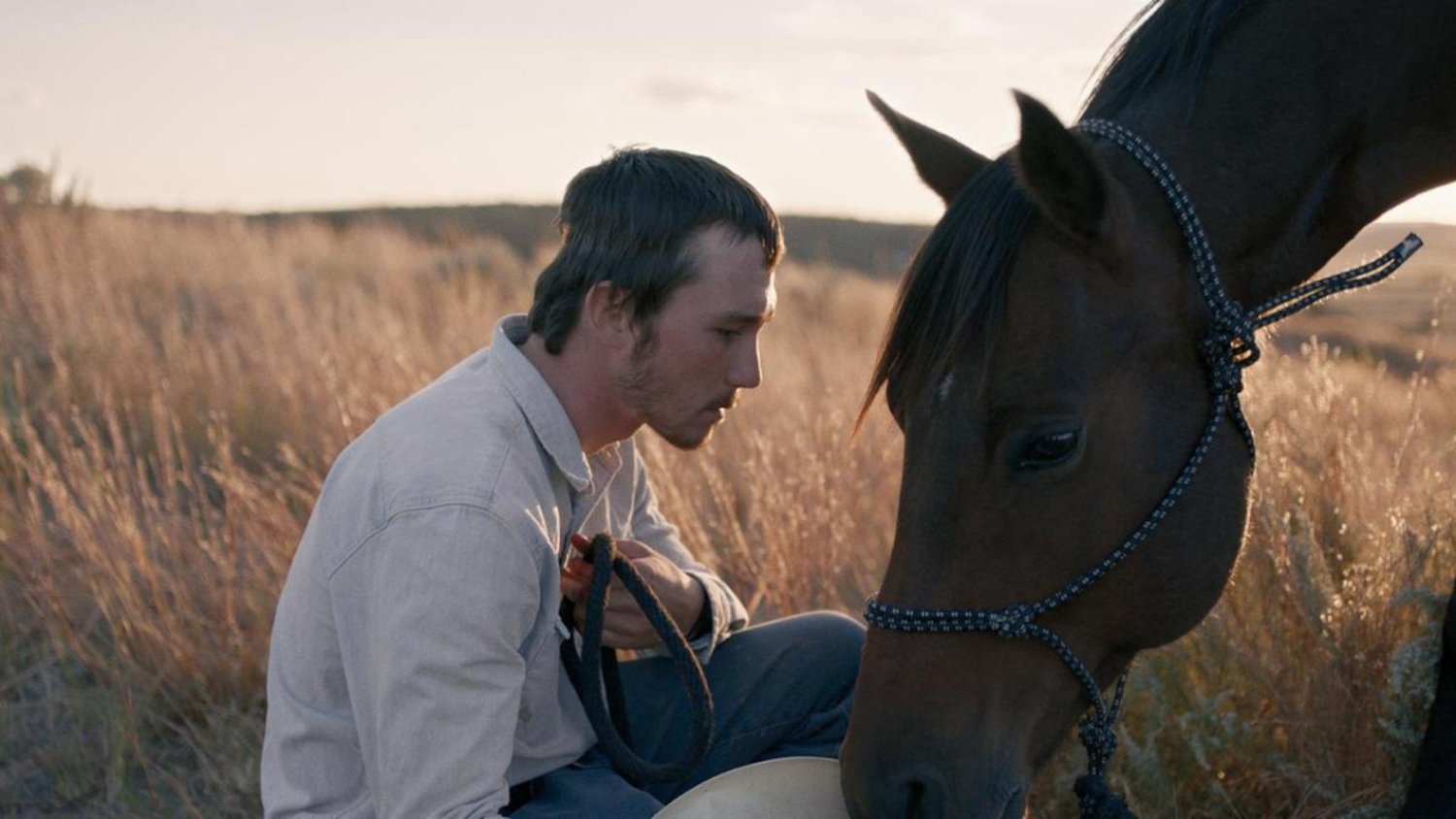 […] But in filming the lives of actual cowboys on their reservation, a cultural contradiction never politicised in the film, Zhao permits us to share in this deeper affinity for riding: a power over that merges the embodiments of both man and beast as one.

[…] She recreates this with a poeticism that softens the starkness and heaviness and provides enough dramatic tension to provoke a suspension of disbelief, making the real even more real.

On a bucking bronco or bull, the rider’s body moves like a machine where the upper and lower body of two even halves opens and shuts in sagittal and diagonal planes. One hand grips the rope and the other arm is anchored high above the head in the air to lever the rocking. Paradoxically this mechanical movement is extremely fluid: a body that echoes for only 6 or 7 seconds “at most” the frenetic movement of the animal. The feeling that is generated by these few moments atop the animal sends men and boys in their droves to risk not only their lives, but to risk never riding again.

The Rider by director/writer Chloé Zhao shows the unquestionable calling of a Native American cowboy’s life in South Dakota’s Pine Ridge Reservation to the gladiatorial world and spectacle of rodeo. Broken and missing limbs, metal plates holding skulls together, seizures, blackouts and permanent disabilities from inoperable brain injuries are just part of their growth into manhood. But in filming the lives of actual cowboys on their reservation, a cultural contradiction never politicised in the film, Zhao permits us to share in this deeper affinity for riding: a power over that merges the embodiments of both man and beast as one. It is a connection viscerally understood in the poise and tenderness of the main protagonist Brady Jandreau (Blackburn in the movie) horse-training techniques that Zhao shoots over several sequences without pause. We are given a glimpse into the unique relationship between horse and rider, one that is raw, palpable, and seemingly beyond the reproach of a non-speciesist’s moral questioning.

The use of untrained actors in film is not new. Some recent highlights include Sean Baker’s Florida Project (2017), and the gritty social realist films of Andrea Arnold, Fish Tank (2009) and American Honey (2016). Zhao seems to push this tradition even further by directing an entire community, including t­hose with debilitating injuries (Lane Scott) and autism (Lilly Jandreau) to perform a true story, their story, that has some fictional embellishments. She recreates this with a poeticism that softens the starkness and heaviness and provides enough dramatic tension to ­­provoke a suspension of disbelief, making the real even more real. We are hit with tear jerking pathos for this injured boy who would rather be shot like his lame horse than live without the rodeo. While realism is best served by a naturalistic performance, the difficulty to have an untrained actor “not act” or “over act” when looked at by a camera, and still perform something of themselves that’s not their normal way of being while inhabiting a representational world is no small feat. Zhao appears to have mastered this facilitation.

The South Dakota Badlands are breathtaking. Wide shots of endless sky spill clumps of cloud onto the prairie grasses in giant volumetric shapes. The rolled-out flatness exposes the earth’s curvature. Outside, we are always aware of the vastness that stretches from any point of orientation. We can understand the desire to narrow these distances on horseback; the land creating the rider. The many shots of Brady riding on the planes, including an impressive dolly shot that manages the same speed of a healthy canter, deepens our sense of this necessary unity.

Inside, we are deposited into the four-walls of a trailer painted blue like the sky, surrounding a stripped-back existence, bereft of a matriarch and full of frozen dinners, dirty dishes and television. The bleakness of the inside spaces of the film (Walmart, bar with card machines, unemployment office) offers a perfect contrast to the beauty of life outdoors that the boys on the reservation ache for. Cinematographer Joshua James Richards attends to the subtleties of light from sun-up to sun-down, taking advantage of the extreme weather when it performs. One other film that shares a similar cinematographic relation to a desolate, arid landscape is the 1963 black and white Western Hud, starring Paul Newman and shot by James Wong Howe. Although the film’s location is the Texas Panhandle, we find in both films visions of the Heartland and its scant formations as gestures inviting contemplation, rather than action. We see people of the land, not on it.

If The Rider is Zhao’s second feature, there is much to look forward to from this director. Perhaps the test for Zhao will be working on a fictional storyline with fully trained actors. 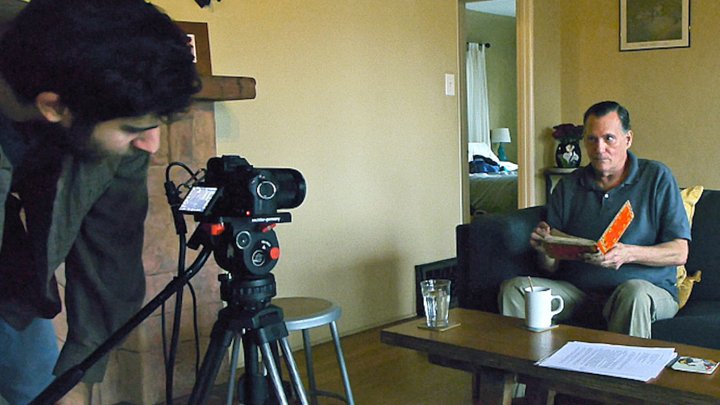 […] The two exhibited films constitute a sort of diachronic collage, where the act of quoting ... 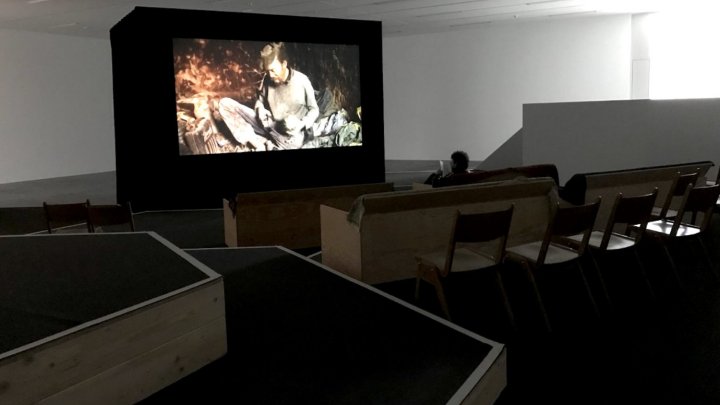 […] In the in-between moments of lucid calm, Corbet proves himself to be the exact thing these ... 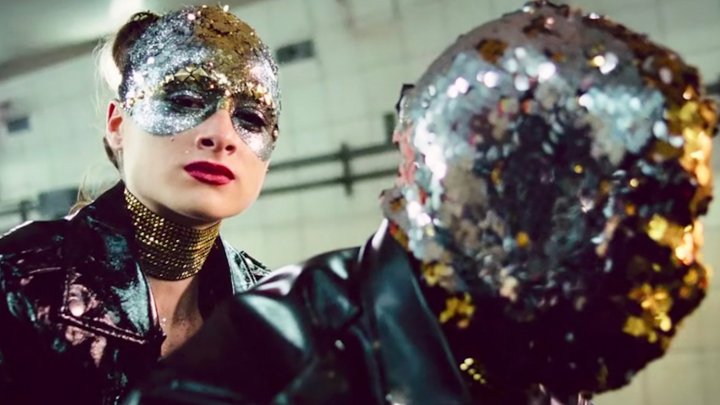