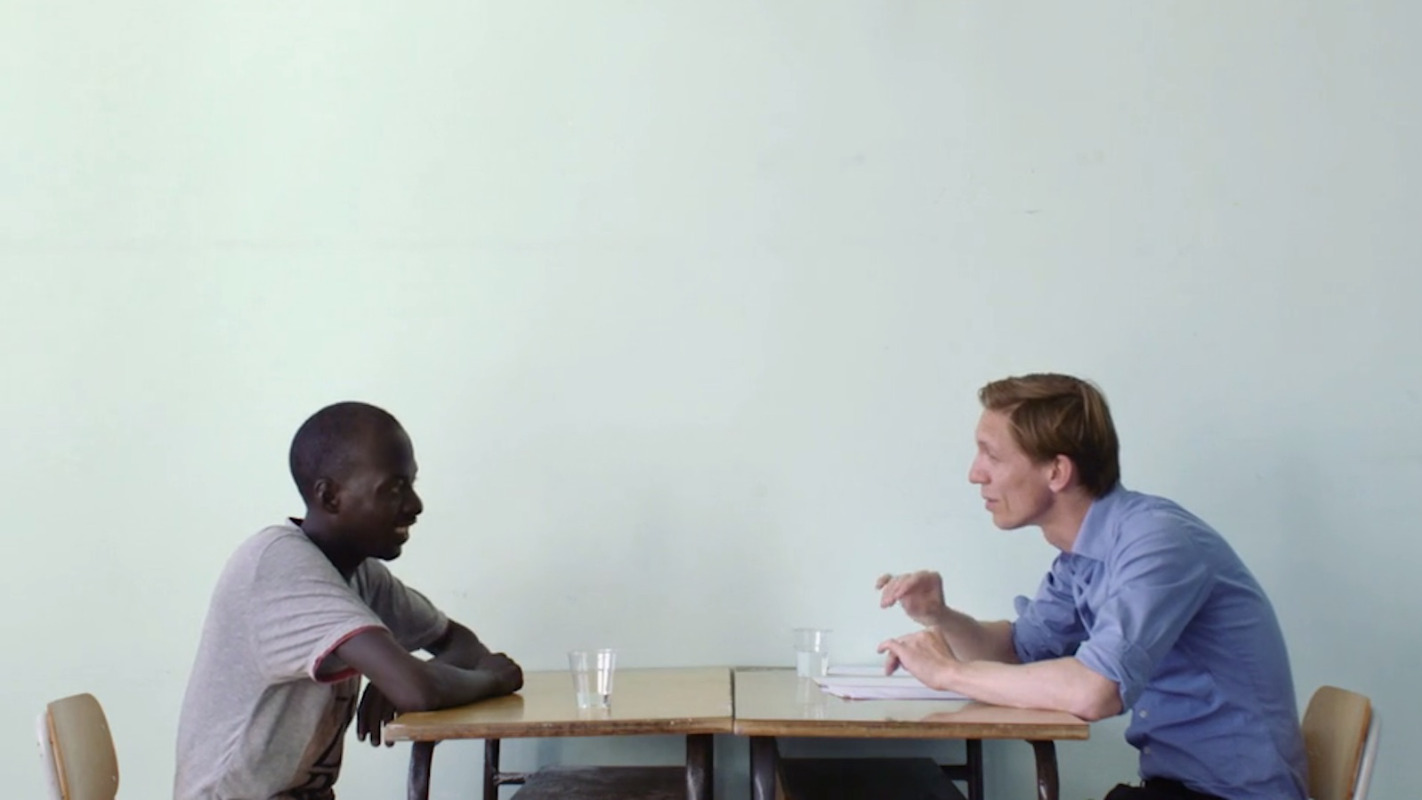 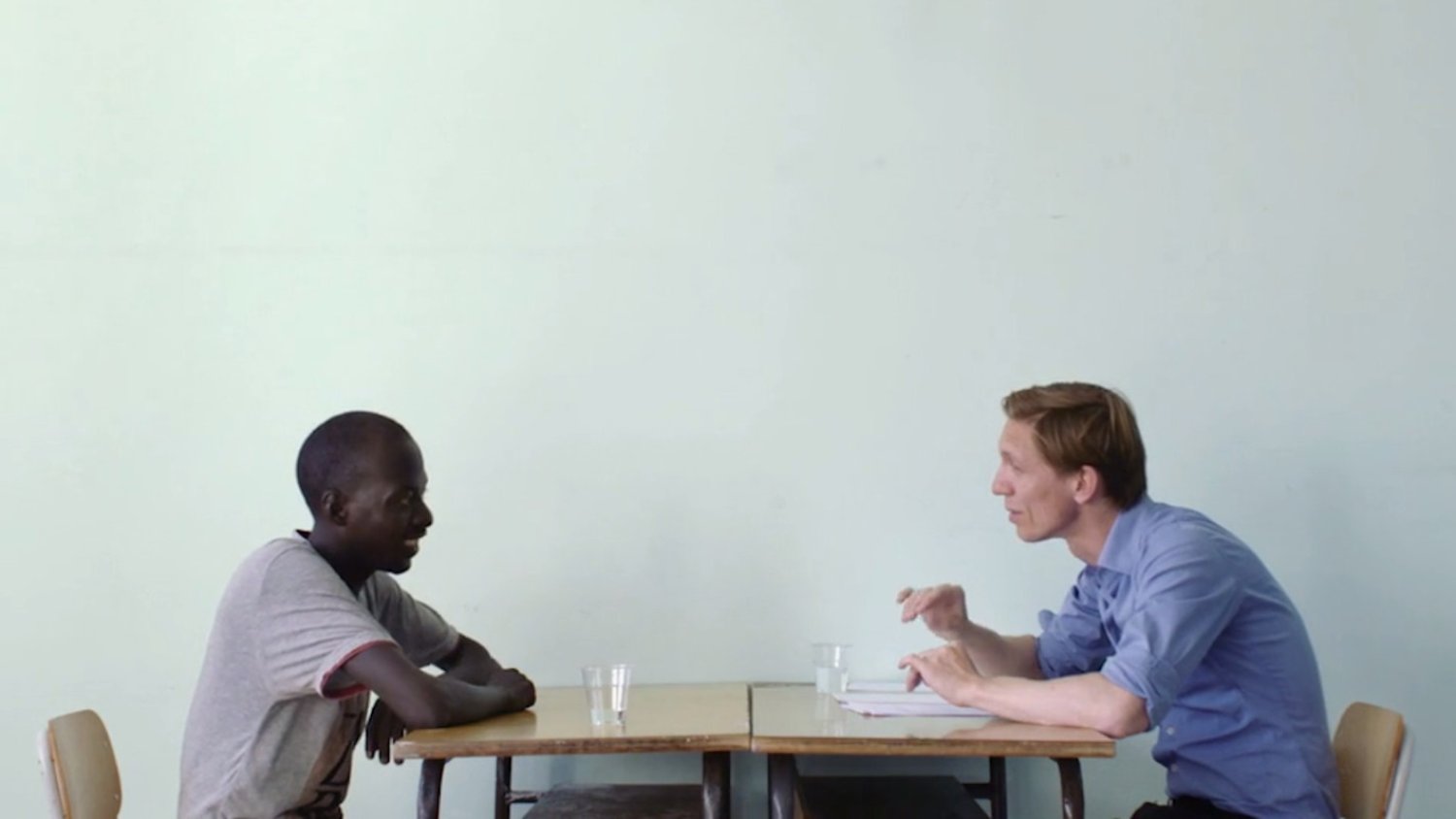 […] Through this original fiction, “Stranger in Paradise” is not only a film of the migrants’ crisis and specifically the daily drama in the Mediterranean but, more precisely, it is a self-reflective commentary on the many different European approaches towards the migrants, and even on Europe in general.

[…] There is an intentional dramatic rift between the dry paradigmatic line presented by the “filmic” figure of the teacher and the contrasting emotive fragility of the “real” migrants. The form of this film – both a documentary and the documentation of a fictional situation at the same time – makes this dramatic difference between us and them quite explicit.

Guido Hendrikx’s film is arranged in 5 parts; a Prologue, three Acts, and an Epilogue. This structure is essential insofar as it greatly influences how the film is received: the development of our experience as spectators through the different components is one of the stronger and more interesting aspects of Stranger in Paradise.

The Prologue shocks us with its clearly exaggerated intent to draw the history of humankind from our biological origins through to the modern-day migrants’ crisis – and specifically, the drama unfolding daily in the Mediterranean. This filmic line manages to be both unhinged and intelligent at the same time; but it is moreover particularly useful in setting the right viewpoint from which to approach the largely debated question of the migration from a broader perspective, and specifically, a perspective that aims to be distanced from the attitude of journalism. This thoughtful approach is used to good effect to introduce the “character” of Europe, which will be given form by a Dutch teacher’s actions – meeting and speaking with the newly-arrived migrants in an undetermined refugee shelter somewhere in Sicily. Through this original fiction, Stranger in Paradise is not only a film of the migrants’ crisis and specifically the daily drama in the Mediterranean but, more precisely, it is a self-reflective commentary on the many different European approaches towards the migrants, and even on Europe in general.

Following the Prologue, the first two Acts expose two different antagonist European attitudes to the issue of the migration into Europe: the phenomenon of today’s mass migration becomes a means to reflect upon Europe’s colonial history, its economic challenges, its demagogic discourses, its very ideologies and values. With great frankness and an almost-caricatural clarity, Hendrikx delves deeply into the untold truths of the very divided opinions of the peoples of Europe. These paradigmatic lines are given voice through the words of the teacher – a very incisive Valentijn Dhaenens – who addresses two different classes of migrants, by explaining to them from his own perspective the ultimate truth and judging on history and the entire world. The migrants give the impression of not being ready for this sort of theatrical game, in which they are allowed only to give very short answers, whereas the camera lingers at length on their puzzled expressions. Therefore, and independent of the antagonist content of the “European” speeches, this filmic mechanism serves to expose and emphasise the strong asymmetry and the radical imbalance of power between “them and us”.

There is an intentional dramatic rift between the dry paradigmatic line presented by the “filmic” figure of the teacher and the contrasting emotive fragility of the “real” migrants. The form of this film – both a documentary and the documentation of a fictional situation at the same time – makes this dramatic difference between us and them quite explicit. “They” are akin to guinea pigs or laboratory mice, testbeds for a self-representative essay on Europe, in which we spectators unwittingly become accomplices. This uncomfortable feeling is developed very strongly during the first Act, where the teacher recites the arguments of those European peoples who don’t want to accept more migrants. However, once we have experienced this even during the second Act where the teacher now shares the opinions of the most welcoming Europeans, we cannot but still feel a persistent unease, which is clearly and intentionally due to the filmic dispositive. The imbalance of power remains, but now it takes the form of the patronizing attitude in the guise of humanitarianism.

The very paradigmatic self-representation of Europe notwithstanding, we do still see a very complex picture of the situation and, more specifically, of our situation as Europeans. For us as spectators, Stranger in Paradise amounts to a kind of “operation truth”. This introspective experience is not just an intellectual exercise, insofar as Hendrikx aims to balance the argumentative words with the authentic insistence in the faces of the migrants. In this way, they gradually stop appearing to be merely symptomatic of a geo-political challenge (i.e. as “them”). Instead, they start to become, in our perspective, genuine human beings, persons, individuals. And this happens even while the teacher, calling them by their names, continues to sound only professionally polite.

This movement of the film, directing us back towards the hard reality of migration, continues to build thanks to the third Act, which focuses on the actual rules that have been imposed, and are governing the migration today. In this very illuminating chapter, we are finally able to evaluate the distance between the reality of European laws – and the point that we have reached through the first two Acts. And now, if we would have aligned ourselves with the welcoming party greeting the migrants’ first arrival on our shores, then the discovery of the European legal structures concerning the migration would certainly come as a shock, akin to taking a sudden cold shower...

Guido Hendrikx’ Epilogue then takes a step back from the filmic fiction and into its making-of. This allows us to consider the film itself as a product and as a specific intervention in the events taking place in Sicily today. For here, we see no more the teacher but instead the actor, who spontaneously meets and speaks with some migrants passersby. Here, the natural empathy of peacefully encountering and interacting with strangers cannot overcome the distance (and inevitable contrast) between the wealthy blond actor and the little cluster of black migrants asking him for help. He may speak with a touch of self-criticism about the world of essayistic films, but he will then leave in a nice car, where there is no place for any of the migrants. In this Epilogue we move from the self-representation of Europe to a self-reflection on the realities of documentary making. Stepping out of the film, in a way, we are confronted with our being not only Europeans, but more specifically being spectators at film festivals: in the words of the actor «making parties, nice women, free aperitifs, meeting rich people». And, to end the discussion, all that the actor – and we with him? – can say is «good luck!». And is this it? Luck? Ultimately, the luck of the birth lottery – impossible to overcome, at least for the those fortunate enough to have won the lottery.

[…] The different formal devices they adopt complement each other to wave a multi-coloured ... 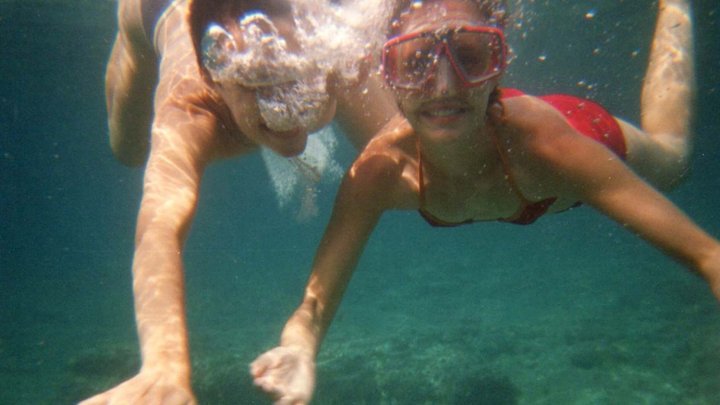 […] It is a “reactive” documentary, made special by the characters’ will to shoot a film ... 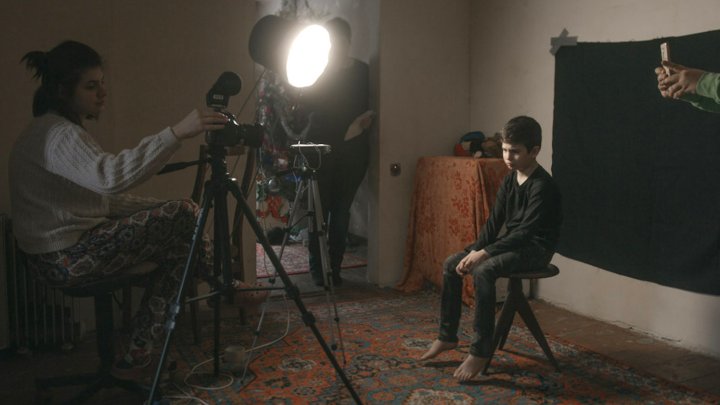