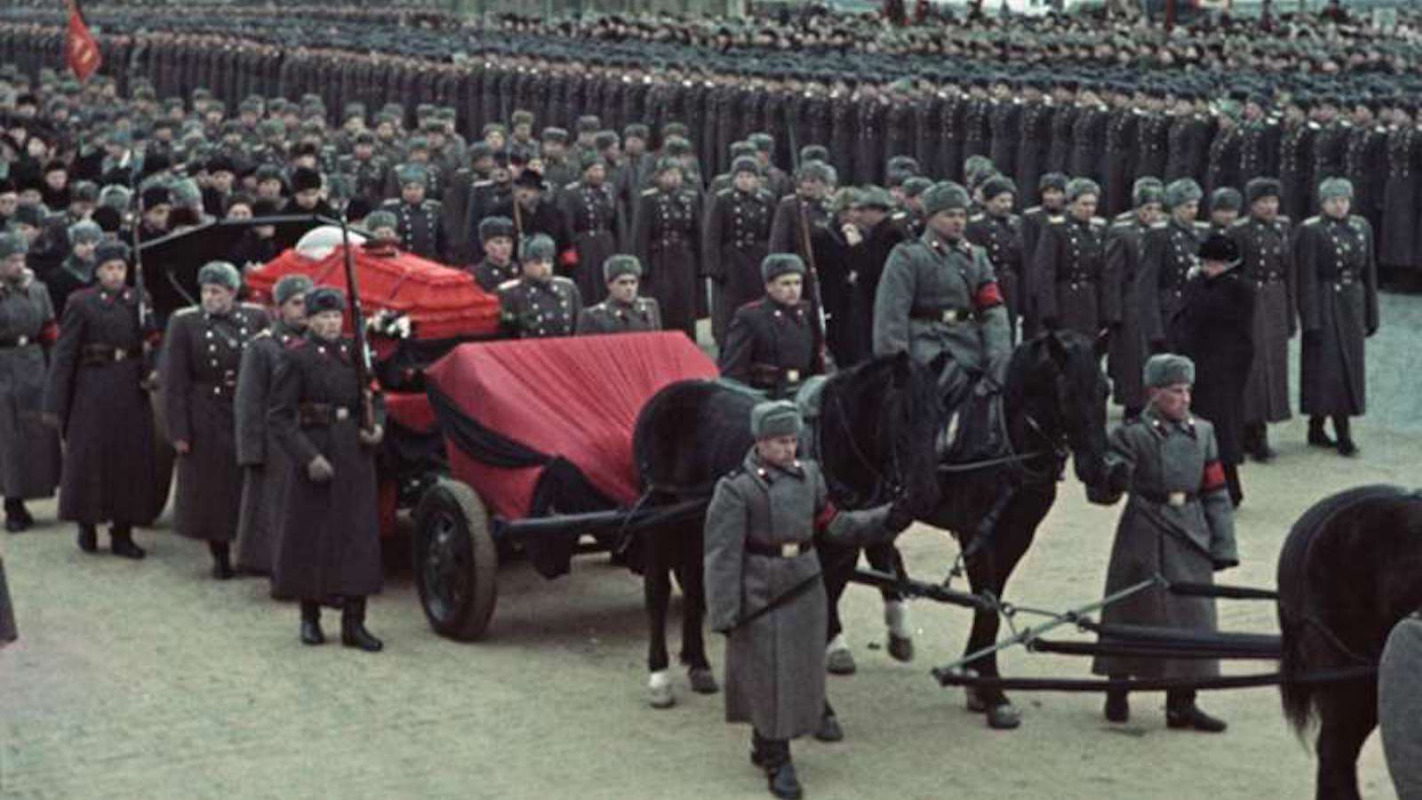 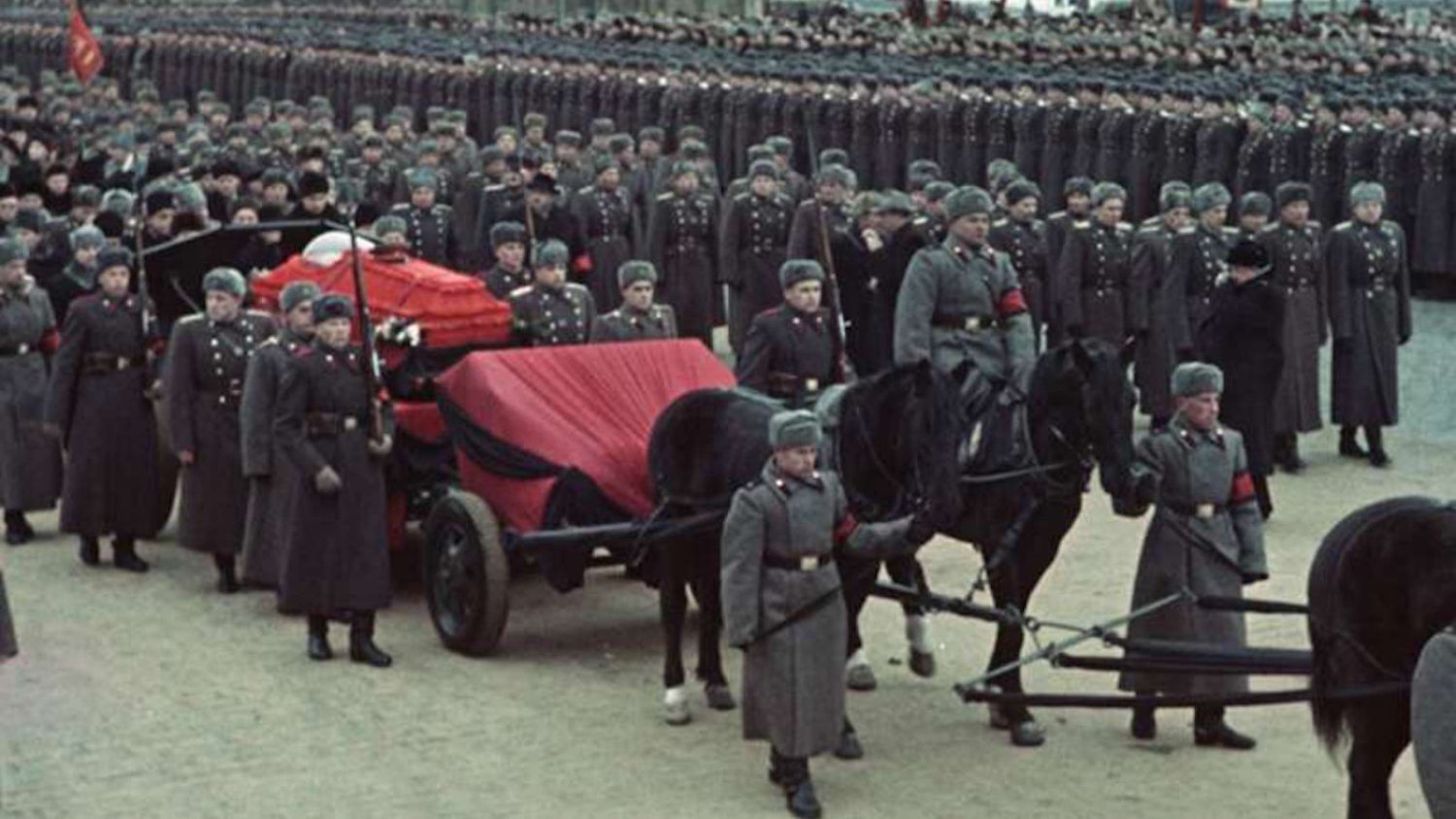 […] Turning propaganda material in a work of art, he demolishes the ideology that pervades the documents he´s dealing with.

[…] These characters of a tale of fear have staged emotions as unique option, trapped as they are in the perverse hic et nunc of a political happening.

[…] Manipulating irony as a tool to desacralize the theatricality of the official ceremony, the filmmaker uses repetition to emphasize the impression of a never changing reality.

Sergei Loznitsa’s State Funeral is a speech over the dead body of Stalin, where the tyrant is less important than the portrait of the reign of terror he created. Assembling rarely seen archive material, including the propaganda documentary The Great Farewell, this essay on totalitarian control profusely covers the five days of hammy lamentation from the announcement of Iosif Vissarionovich Dzhugashvili’s death to his entrance in the Lenin Mausoleum, offering us an unusually profound experience of Stalinism.

Akin to Leni Riefenstahl´s Triumph of The Will, State Funeral has two mains subjects: the leader and the masses, but Loznitsa´s reading of this political score is different, as corresponds to someone who is neither a partisan nor a contemporary of Stalin´s dictatorship. Turning propaganda material in a work of art, he demolishes the ideology that pervades the documents he´s dealing with. This burst of massive hysteria provides eloquent elements to analyze how a despotic regime constructs the feelings and actions of its citizens and how an event designed to keep alive the image of their immortal helmsman becomes a destructive boomerang.

Exposed to a public ritual, the hundreds of people we see in State Funeral are pushed to be part of a collective ceremony of mourning, unaware of what the future will bring. We know what its past was. Performers of sincere or forced grief, their private time loses its identity in the hands of historical time. These characters of a tale of fear have staged emotions as unique option, trapped as they are in the perverse hic et nunc of a political happening.

As many filmmakers have done in the last decades (Bill Morrison, Gustav Deutsch, Péter Forgács, Andrei Ujica or Angela Ricci & Yervant Gianikian), Loznitsa shows the fruitful way that archives can speak when used in a non-orthodox manner. One of its main sources is a film of this season, the academic Great Farewell, whose editing is faster than Loznitsa´s, its voice over constantly indoctrinating the audience. On the contrary, State Funeral lets time flow freely, replacing information with involvement. Manipulating irony as a tool to desacralize the theatricality of the official ceremony, the filmmaker uses repetition to emphasize the impression of a never changing reality. The long lines of thousands of people advancing at slow pace or climbing staircases give the funeral rite the look of a recurrent dream, a soft nightmare where sublimity is forged with saccharine discourses and an overdose of romantic classical music (mainly Tchaikovsky´s Fifth and Sixth Symphonies). Danielius Kokanauskis´ editing is impressive. Sometimes, the treatment of raw material exploits imperfections that have a pureness in themselves that premeditated art has not; sometimes, the precise cutting is a proof of refined virtuosity. Perhaps the highest point is reached in the two shots that precede the slushy concluding lullaby´s section, when four men come out of a metallic structure, as prisoners from a cell, and the sound of a closing gate reminds us of the sound of the opening of the hearse door in the beginning of the film.

State Funeral is above all a picture of faces amid the pomp and circumstance surrounding the wake of a man who was the superego of a whole nation. Hence, the anxiety about what the camera can reveal. The nearer women and men come to Stalin´s corpse, the nearer they come to paralyzing horror. A good many are not only expressing feelings, but exaggerating or hiding them, all alone in their nakedness in front of the eye of the camera. That´s not the exclusive concern of those with no name, but also of public figures attempting to preserve themselves and occupy the place of the dead commander: the half-Downish Malenkov, exhaling stolid mediocrity; the ruminative Khrushchev, knotting the trap to catch his rivals and seize the throne; and the anxious Beria, surveying his surroundings and preparing himself to be the successor of his master – the jewel of this game of domination occurs in the funeral procession when Beria hastens Khrushchev who is behind him to come to his side.

In some way everybody is in Stalin´s coffin and Stalin is inside everybody through all this obese manifestation of cult to his personality, prodigal in dithyrambic excess to pay homage to a dominant father, praised as bold and wise and inspirer and genius, but at the same time calling to keep a close watch on the enemies. A somber aura permeates this play of totalitarian theater where the machinery of power is invisible, breathing in a terrific hors-du-champ, a device that enhances the uncanny condition of this soapy and hysterical celebration of a mass murderer. This ironic contrast makes of State Funeral a terror movie where it is evident what Ricci and Gianikian call «the contemporarity of the past».

State Funeral is a film of faces, faces without information that put State leaders and peasants on the same level. Just people in front of the camera, again and again, that create a powerful experience for the viewer, conveying this “contemporarity of the past”. It is rare to experience such an insistent nakedness of the archive material, whose potential is often “neutralised” by informative commentaries or essayistic digressions. Moreover, the abundance of eye contact positively unsettles us, like a lively embodiment of universality, a universality that speaks of suffering, terror, submission, certainly more than grief. There is almost no need to know about the 42 million people who died or starved because of Stalin in order to feel the zero-degree of a society that is completely haunted by death. Some contrite tears put aside, there seems to be no reaction at all coming from the mass, no words, no applause, no participation. The heavy silence expresses a humanity simply turned off. Only Karajan-style (that is Nazi-style) adagios fill the silence, which makes the whole even more disturbing.

In my experience, after the first half-an-hour, the film goes beyond being a brilliant piece of ironic criticism and becomes a “physical” film, where the totalitarian repetition of the same makes our perception ache, also because the orderly (and ordered) movement of the mass produces a real seasickness. State Funeral is not only a shocking self-deconstructing document, it is also a performative work of perverse op art.

An almost metaphysical touch is expressed in the end by the spaceship design of Stalin’s coffin, a trick that the totalitarian scenography would need to pathetically sublimate mortality in order to defend the romantic (Herderian) immortality of institutions (the party). The answer to this ultimate gesture of rhetoric – the words on peace and happy life clearly sounding odd – is entirely in the people’s looking at the quickly rotting flowers, as if the fading life would better represent the people's misery than the celebration of the glory and death of a global hero. 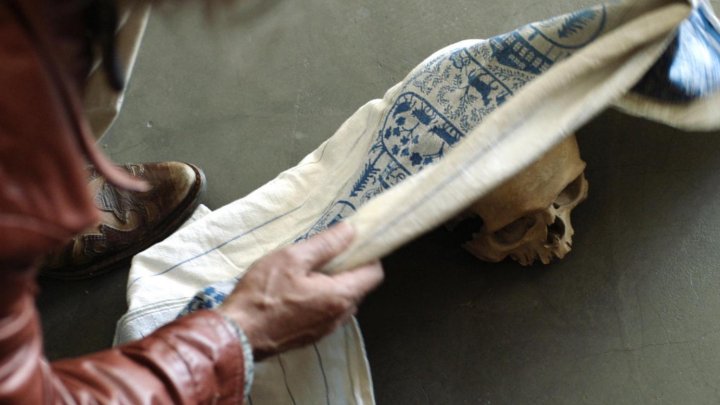 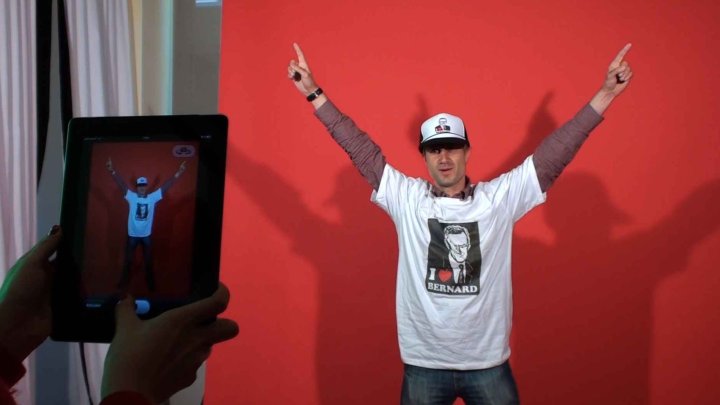 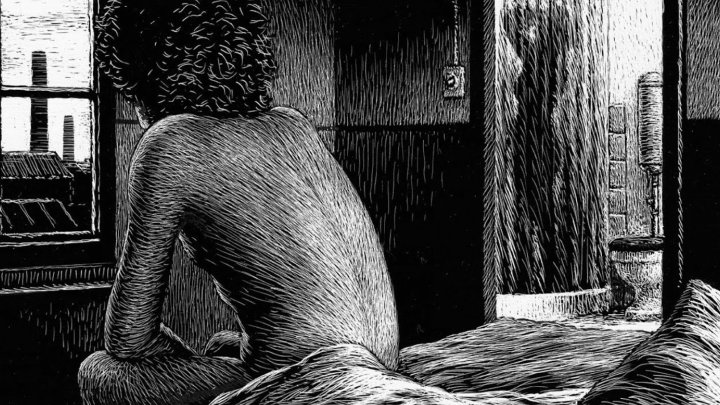