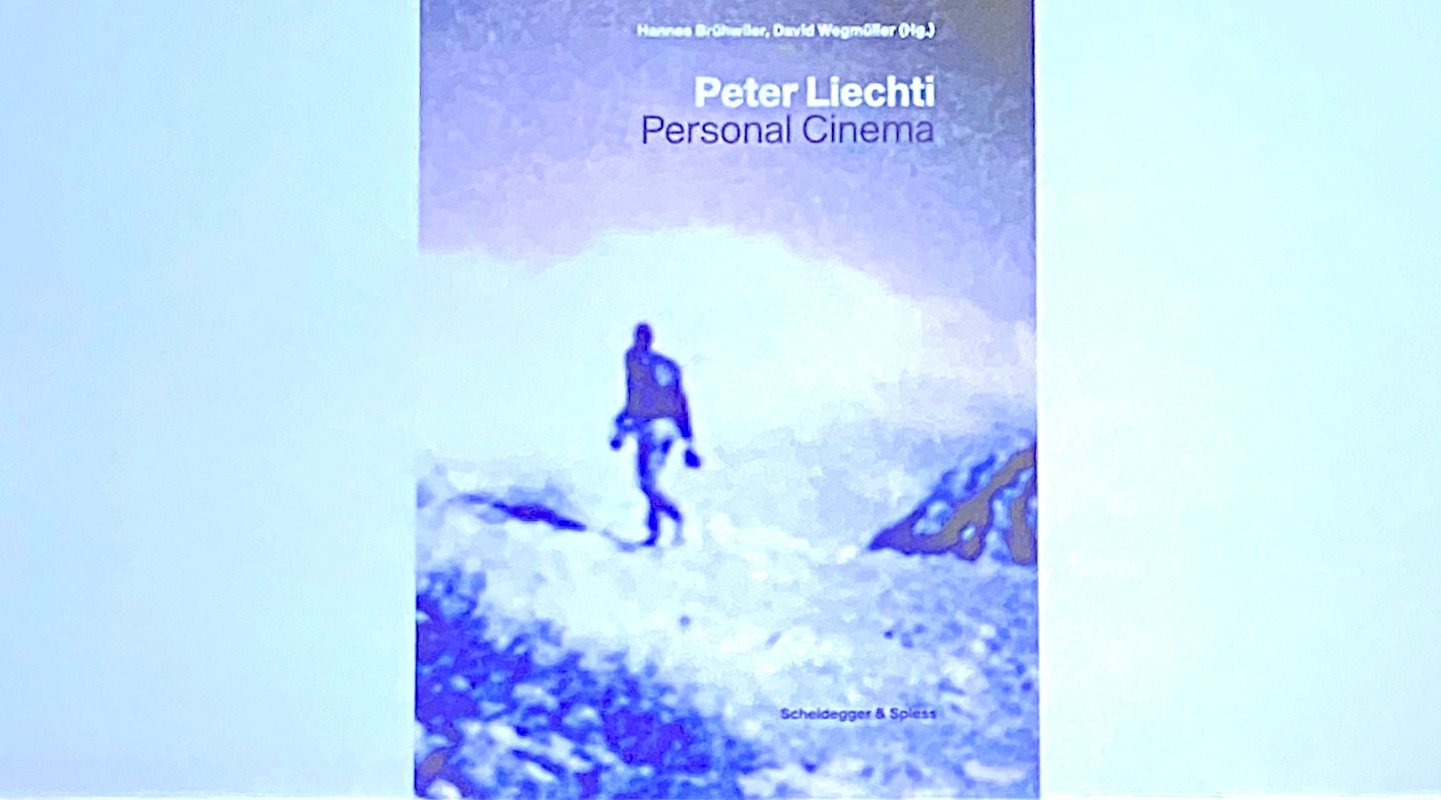 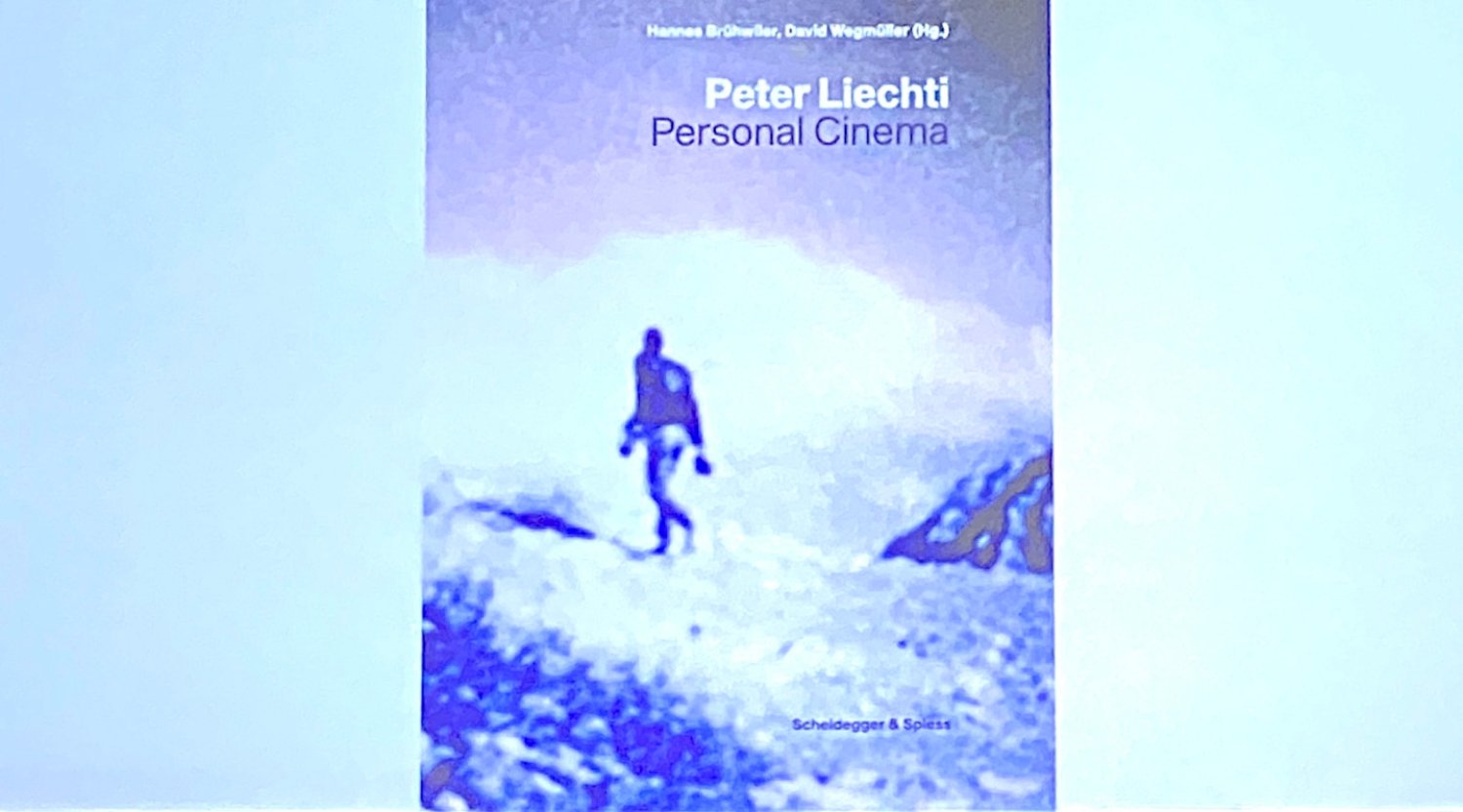 […] Be it about himself, his parents or an important friend of his like Roman Signer, his films have got the most intense, almost aching intimacy, yet not without an analytic cinematic gaze or an almost clinical voice over.

[…] The tension between seizing and the unseizable is wonderfully summed up in what the book editors brilliantly propose as a pivotal image for his career and inspiration: …

[…] Even if it sounds somehow speculative, I cannot resist the suggestion of thinking the birth of his cinema in coincidence with the disappearing of writing through the radicalisation of the practice of the microgram. 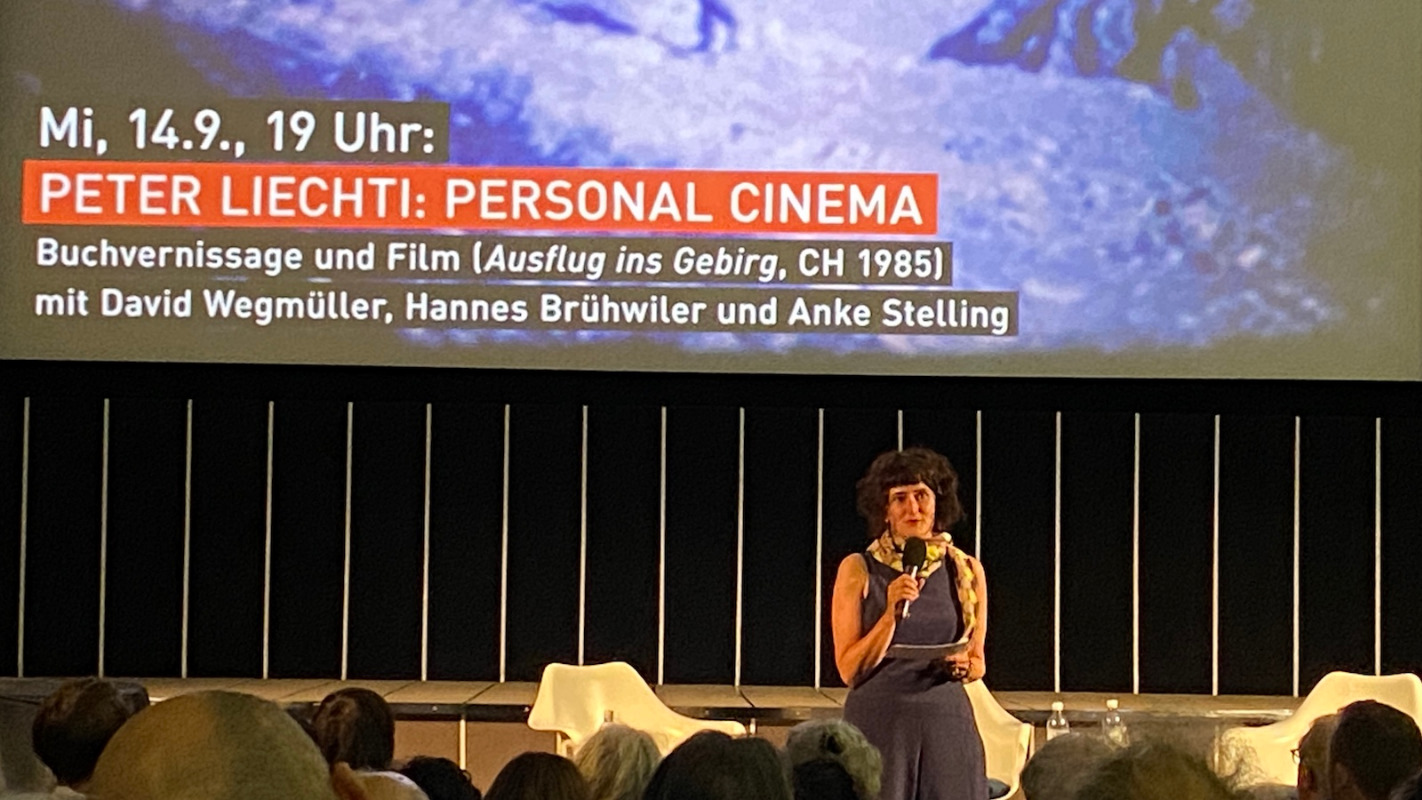 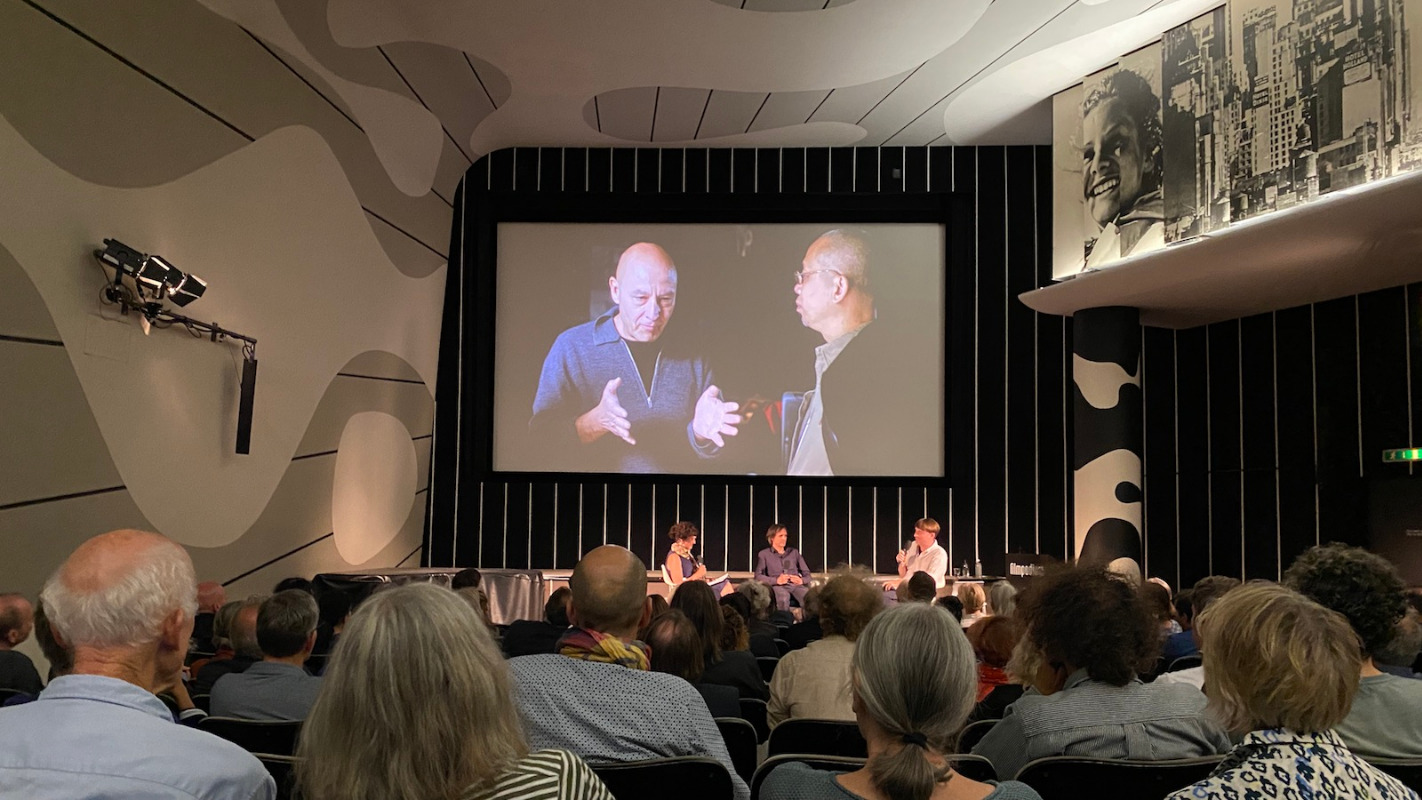 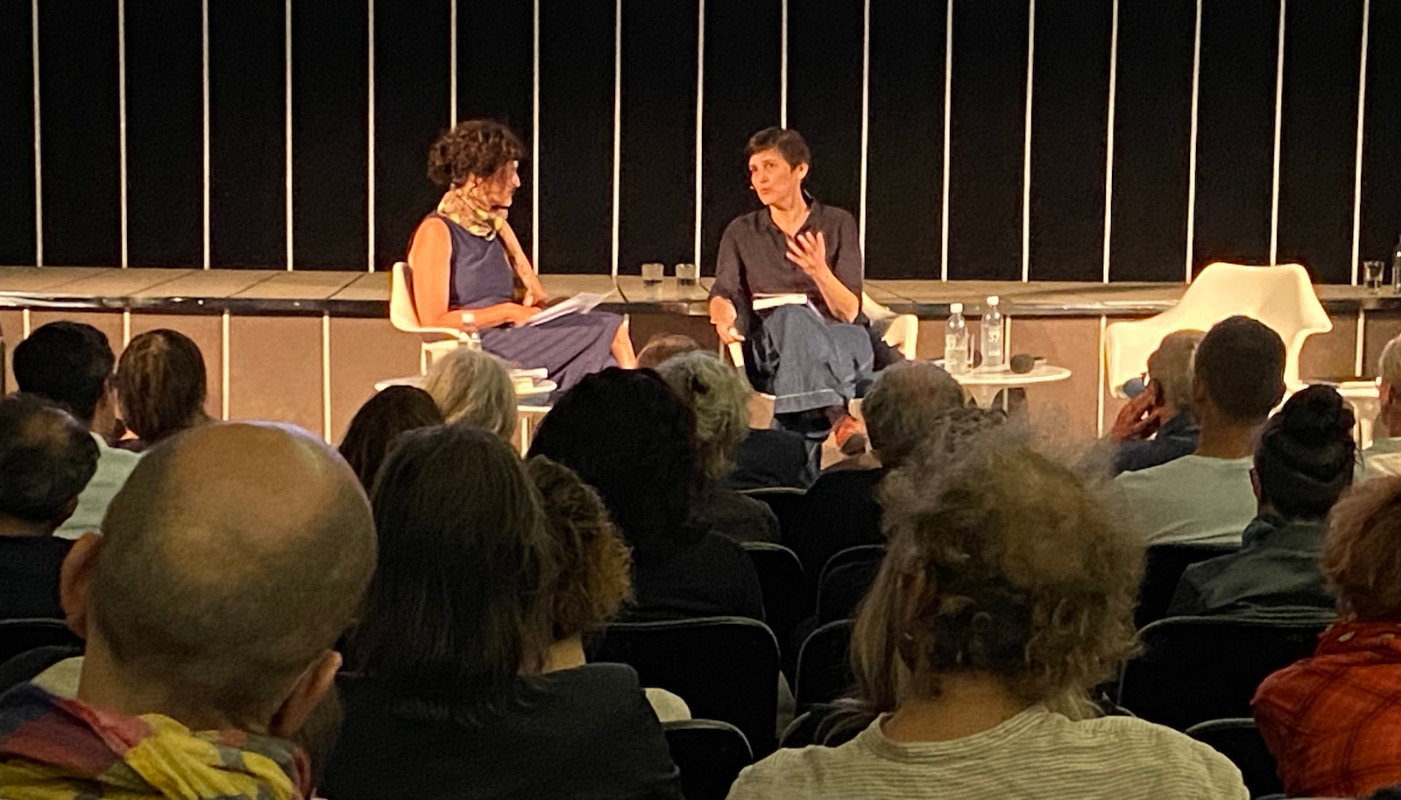 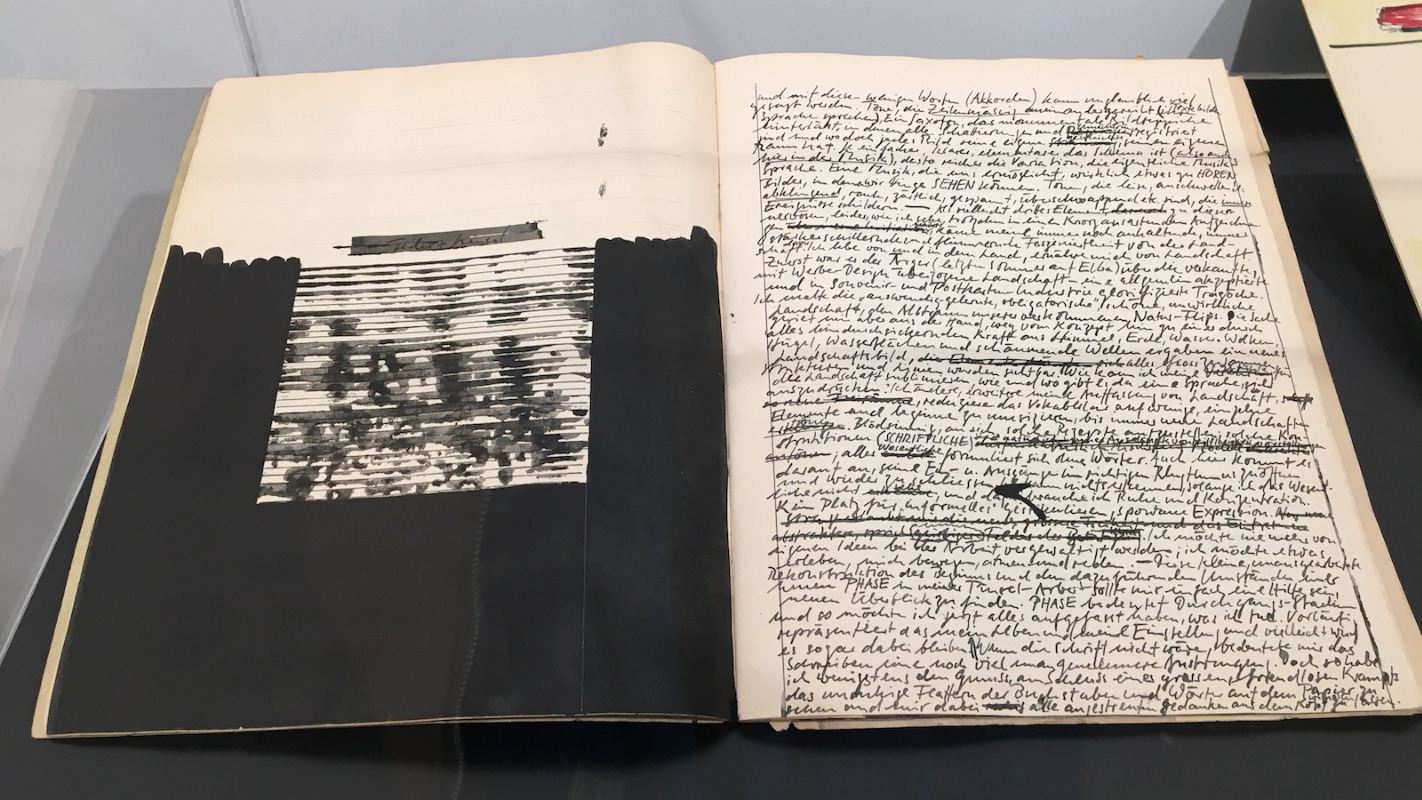 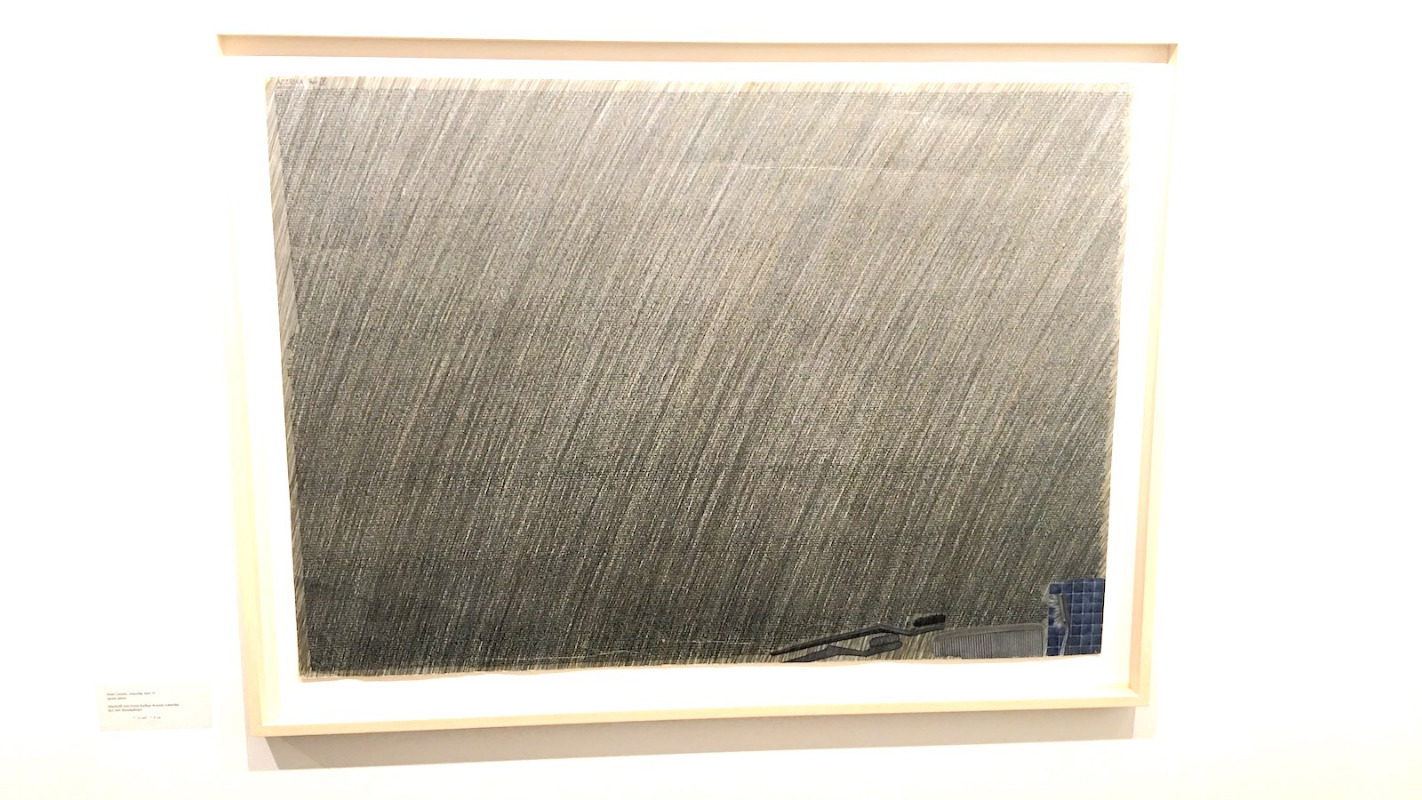 Intimacy through distance: the English persona

I am not sure that the best way to speak about films is in making films – with all due respect to Jean-Luc Godard. Texts are intimate accomplices before, together, within, and after moving images, for better or for worse, and Peter Liechti’s cinema art is a wonderful example of a multifaceted and complex relationship between text, image and sound, not least because the celebrated Swiss director was also quite a good writer.

However, after few minutes listening to the presentation of the book Peter Liechti: Personal Cinema (Scheidegger & Spiess, 2022) at the Filmpodium in Zurich it was clear to me that, if I should write something on it, it would not be a further text on Liechti’s cinema or a commentary on what the texts in the book say but would rather focus on the inspiring concept of the book. In fact, one can only praise the editors Hannes Brühwiler’s and David Wegmüller’s crucial decision to avoid any kind of hagiography and to expose Liechti’s works to - and show it through - an international perspective. For a very familiar and highly respected author, as he is considered in Switzerland, paradoxically risks to become invisible, or forgotten: too obvious to applaud him, too uncomfortable to criticize him, result: no discussion. Only a distant gaze can make us (re-)discover the intimacy.

And this shall be said for the specific situation of Liechti having died 8 years ago at 63 years old, and more in general for the special relationship between distance and intimacy. A relationship that has actually been at the heart of his own way to do cinema: be it about himself, his parents or an important friend of his like Roman Signer, his films have got the most intense, almost aching intimacy, yet not without an analytic cinematic gaze or an almost clinical voice over. The “personal” level of his cinema relies on putting the universal aspects of subjectivity and on the subjective aspects of universality forward.

This is why I decided to write my reflections in English, perfectly aware that it could appear like putting an unusual mask on an author well anchored in Appenzell and the North-East of Switzerland, which at the same time is the mask of a cosmopolitan artist... and “mask” is the original meaning of the Latin word persona. Let us say so: Switzerland certainly needs the World to tell her (Helvetia) about Liechti in German, but the World would also need Switzerland to tell it about him in English. A reason to hope that the book Peter Liechti: Personal Cinema will be translated soon.

Following the thread of the Personal in terms of using several strategies of placing at a distance, the plurality of perspectives of the international contributors to the book expresses the non-extinguishable perfectibility of the portrait of the person, and this applies not only for the person Peter Liechti, but for his artistic oeuvre as a whole. Therefore, the idea of “personal cinema” does not take the form of a thesis of the editors, but works as a prismatic environment where Liechti’s cinema can be observed only through a multiplicity of perspectives.

That his cinema is personal will mean that its object is as non-extinguishable and perfectible as a person is (a justification for his perfectionism?). The object of his cinema, that is the several themes that animate his films, is an unseizable item that is put at the horizon of a movement of approximation. Be it death (Das Summen der Insekten – Bericht einer Mummie, 2009), the influence of nature on art (Signers Koffer – Unterwegs mit Roman Signer, 1996), the familiar bond (Vaters Garten – Die Liebe meiner Eltern, 2013), or the will (Hans im Glück – Drei Versuche, das Rauchen loszuwerden, 2003), the topics of his films are fleeting centres – which probably explains Liechti’s recurrent importance of physical movement in his films.

The tension between seizing and the unseizable is wonderfully summed up in what the book editors brilliantly propose as a pivotal image for his career and inspiration – that is now for the first time to be seen at the exhibition at the Galerie Litar in Zurich curated by Christa Baumberger (together with other works by Peter Liechti and several curated compositions of images, films and texts): the drawing with the “microgram-like” re-writing of the whole of Franz Kafka’s Amerika on paper (in the mid-Seventies), which apparently amounted to his decision to start making films. Even if it sounds somehow speculative, I cannot resist the suggestion of thinking the birth of his cinema in coincidence with the disappearing of writing through the radicalisation of the practice of the microgram.

Robert Walser is, of course, an obligatory reference,  not just because of Liechti’s explicit homage (Walser should have been a protagonist of his last film project, a trilogy), but also because of the importance for both artists of the inner monologue and introspection – a decisive intuition in Lukas Foerster’s excellent contribution. Re-writing a literary text expresses the need for a physical exteriorisation of an inner experience, which is again a strategy of putting it at a distance in order to seize the unseizable: intimacy. A sort of material illusion, one could say, which is nothing but the matter of cinema itself!

Here it is interesting to notice how, according to the idea of cinema stemming from the deception of writing, cinema would not be an expanded writing, but rather the result of writing’s implosion. The inner monologue can be considered as writing’s implosion and cinema as the materialization of the introspective experience. Here is a fascinating line of interpretation of the intertwining of text and moving image.

A question of reception

In the same contribution about Liechti’s minor texts, Foerster refers to Liechti’s own connection between introspection and a theory of reception (see the text Dokumentarische Haltung, 2004, that is re-published in the book), and here I want to put another emphasis on the coherence between the concept of the book and Peter Liechti’s aesthetic. The main position of the artist-director is the one of reception of his own’s experiences, therefore the gesture of focussing on our own’s receptions of his films and texts seems to have an almost embarrassing character of continuity. Revolt against filiation and continuity in the spirit, and continuity in the revolt against filiation, makes of Anke Stelling’s delightful text in the book (and performance at the Filmpodium event in Zurich) probably the best “dramatic” example of what receiving Peter Liechti’s works means, because her writing don’t fear to present him as a distant personality that, at the same time and also probably for this reason, becomes familiar and intimate. Not without stressing the puzzling side of this intimacy… An example of “personal writing”, in order to echo the book’s title.

January 2014: I sit alone in the second row of Solothurn Kino Palace, and it is strange for me to have him only at two meters of distance during the Q&A after the projection of Werner Herzog’s Auch Zwerge haben klein angefangen (1970). For I had never spoken with him even if I had several friends knowing him very well and was already familiar with his cinema. The renewed pleasure for Herzog’s film made his presence quite intimate, while furious reactions against his choice (a carte blanche that was meant as a sort of cinematic last will – his disease was already known) made the atmosphere quite tense. But in this puzzling situation he kept perfectly calm and, after a pause of suspense, replied that he was happy of the strong reactions, even revolts, to the film, insofar as this is the task of films. And, of course, to discuss them together. And probably also to write on them, again, until the next writing’s implosion, until the next film.

Go to Filmexplorer's article on «Dedications» 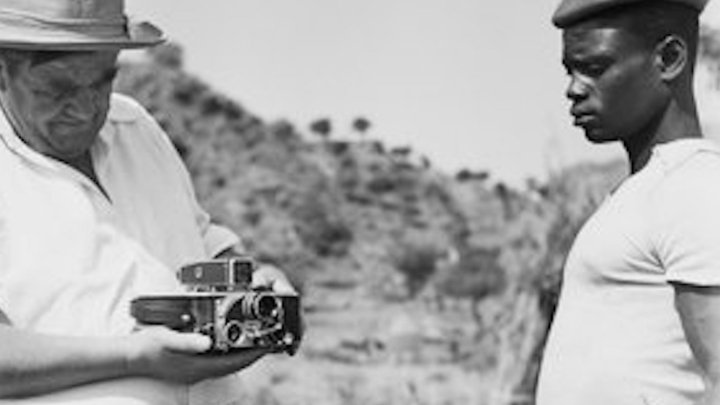 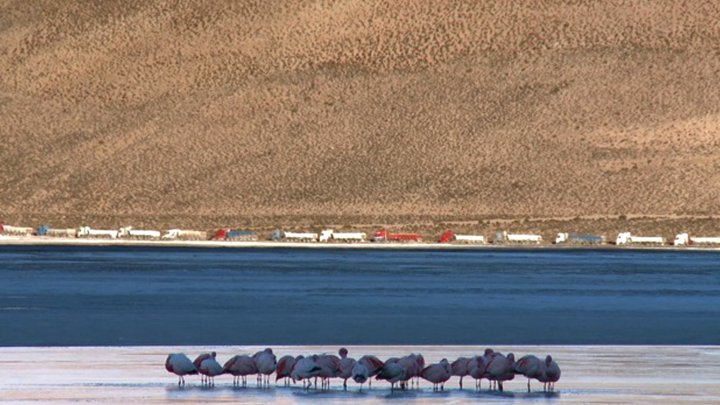 […] Despite being filmed over several years that would have produced tons of footage, we find ... 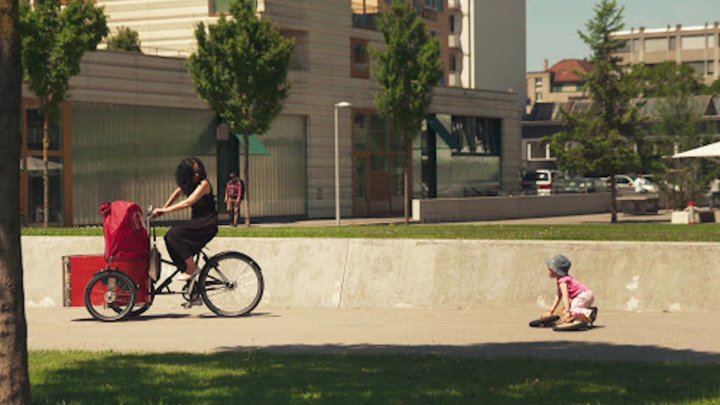