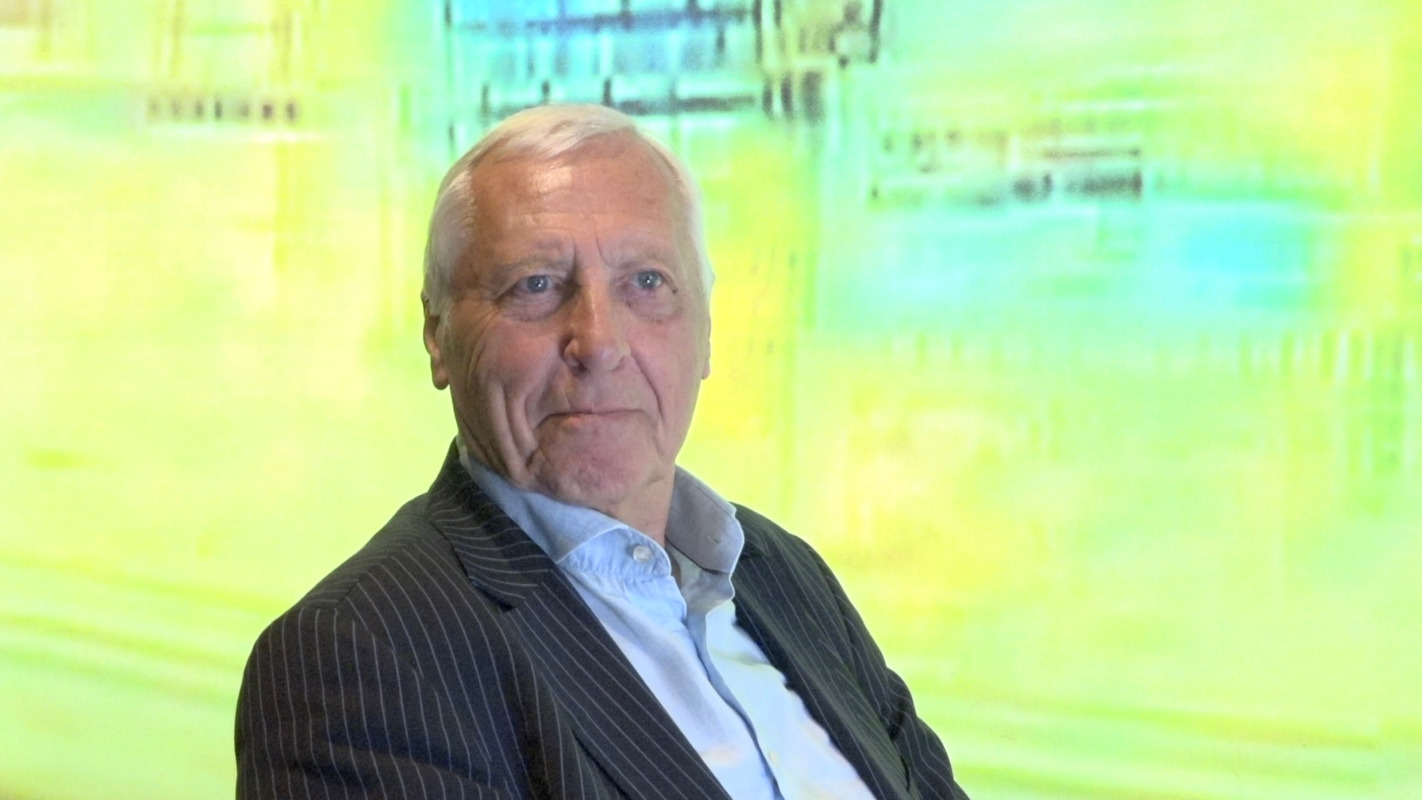 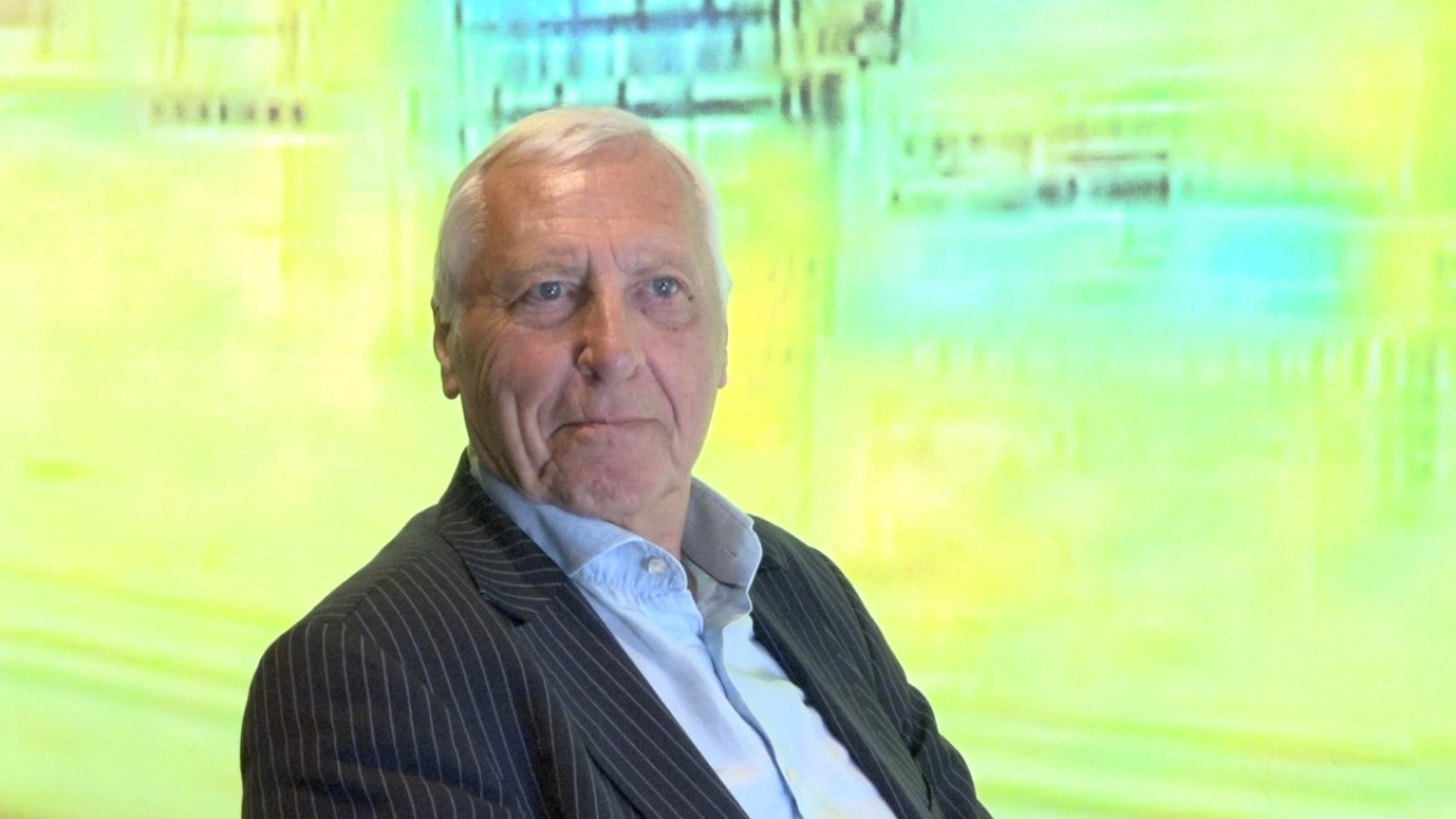 […] What is exceptional in Greenaway’s works is the radicality with which such themes are explored, a radicality that is enhanced by the aesthetic generosity provided by this “cinema painter”.

[…] One specific feature of Greenaway’s works is that he does not only propose something to see but also creates the specific grammar to read it, the specific landscape to make it sound, he gives to us its own world – which is exactly what makes a work an oeuvre.

[…] Deep down, his passion for the most ambitious encyclopaedic projects, a sort of ultimate work of putting order in the world, is perfectly consistent with his passion for fiction. 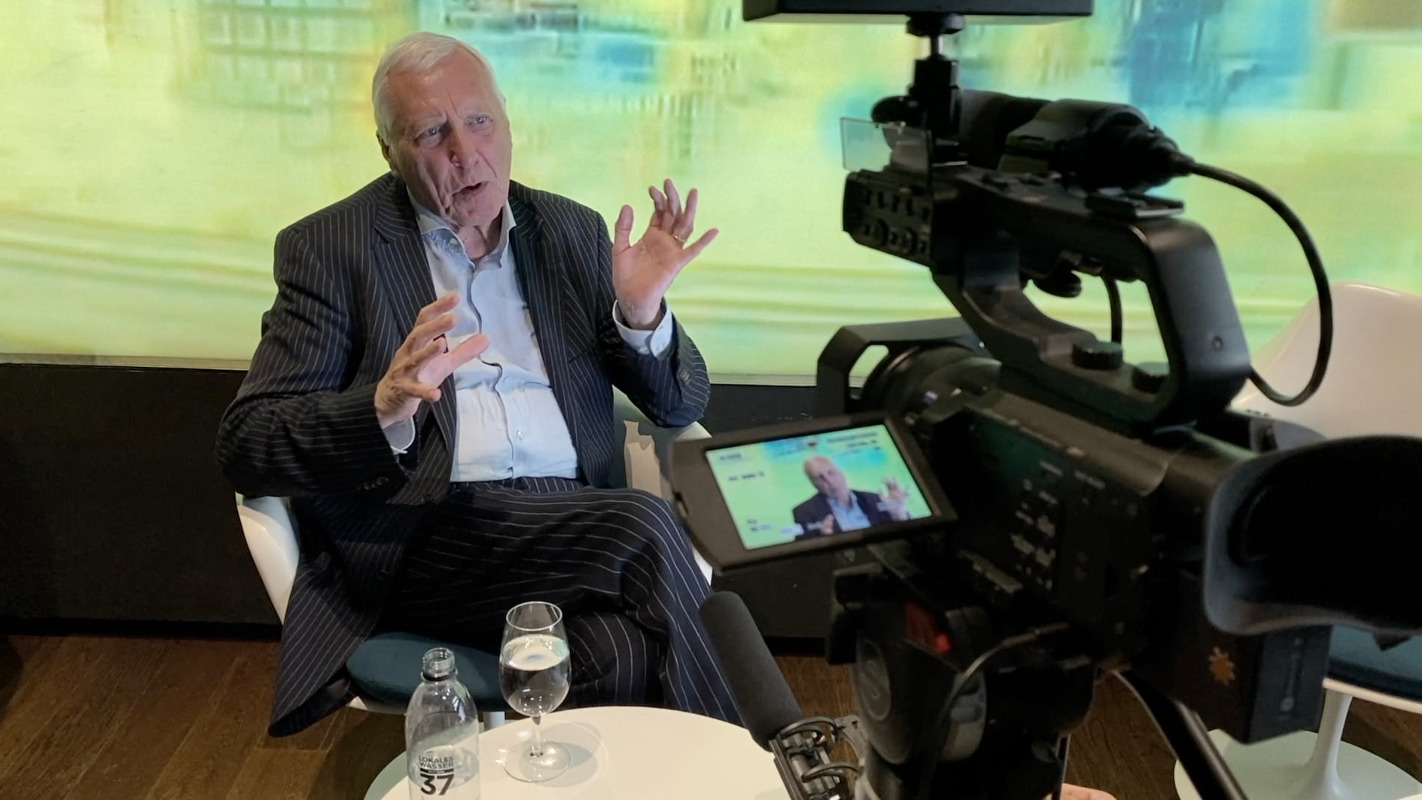 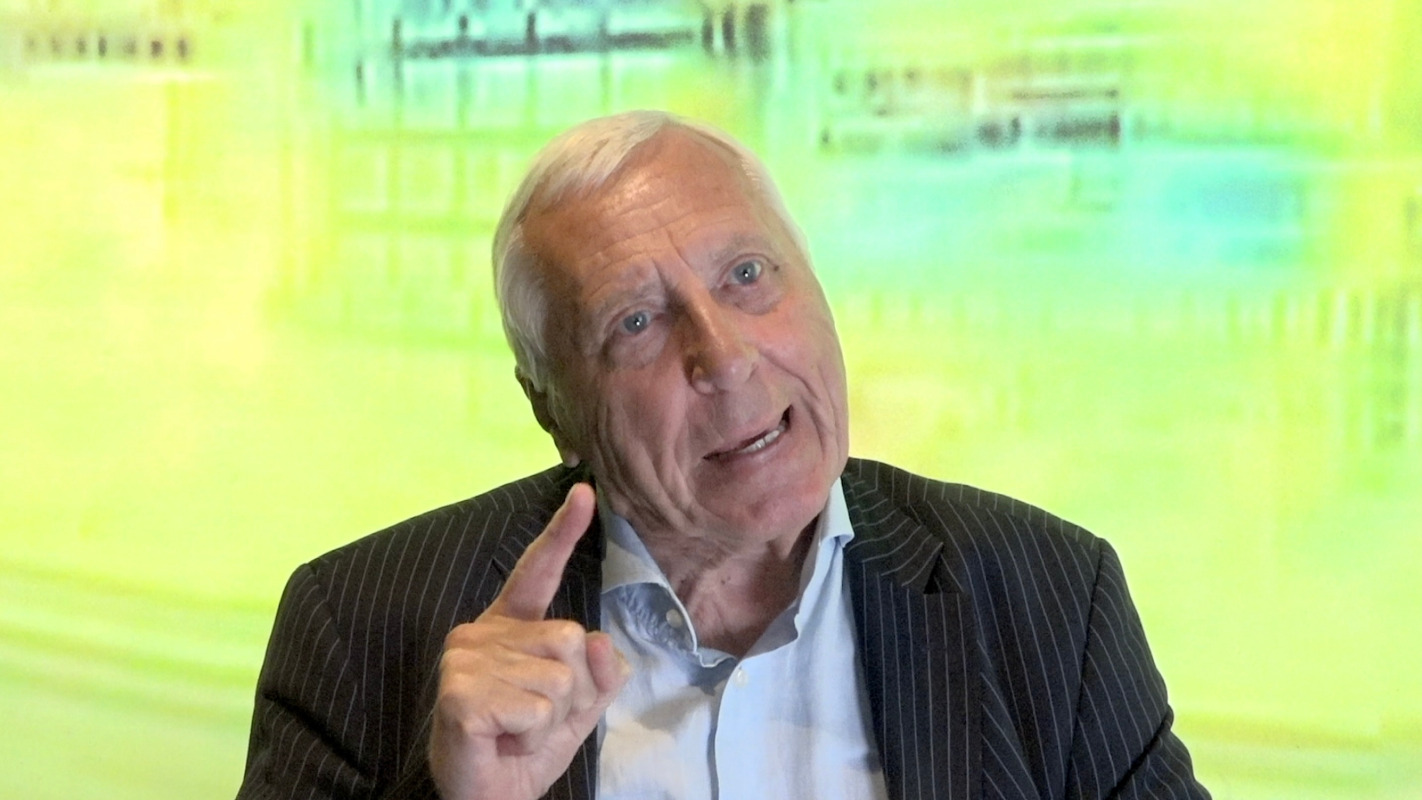 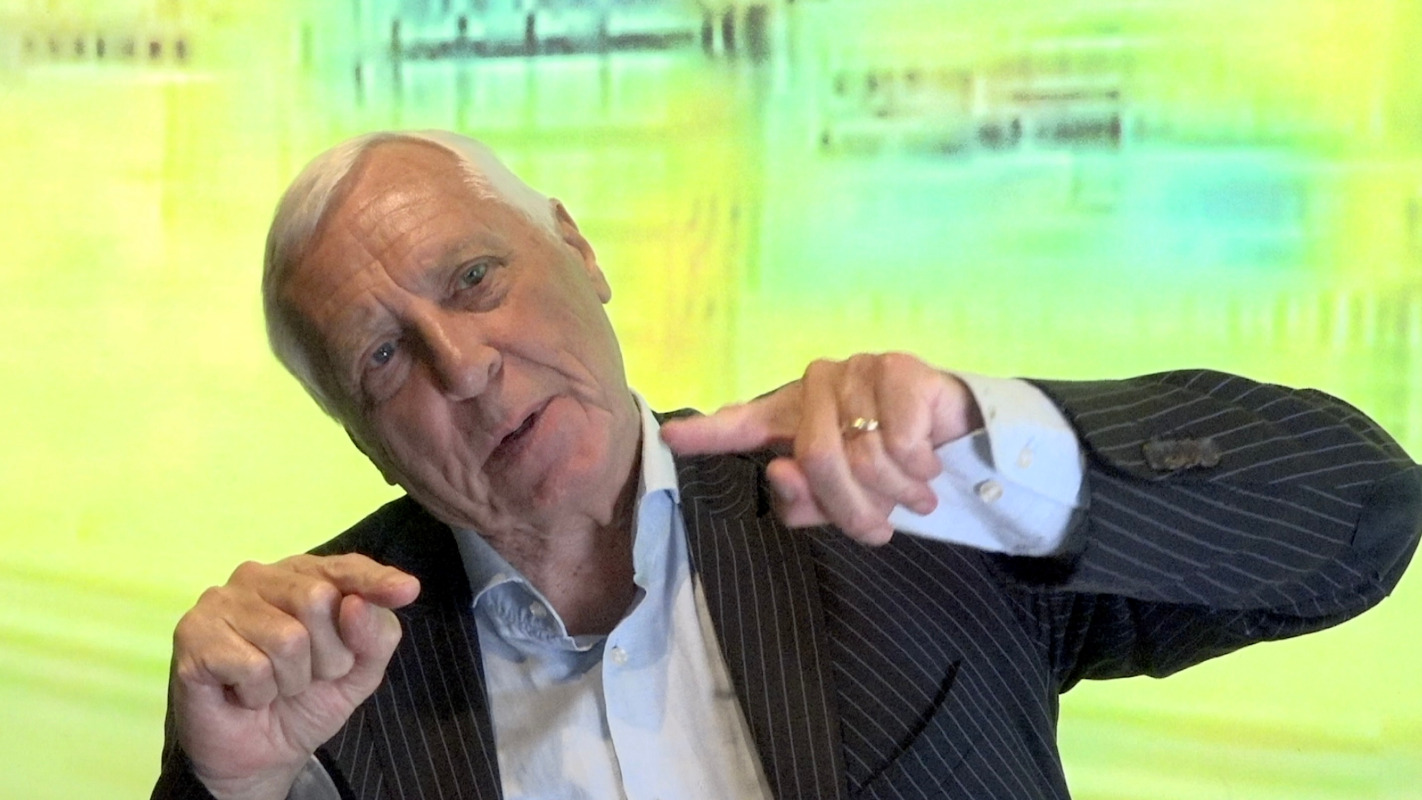 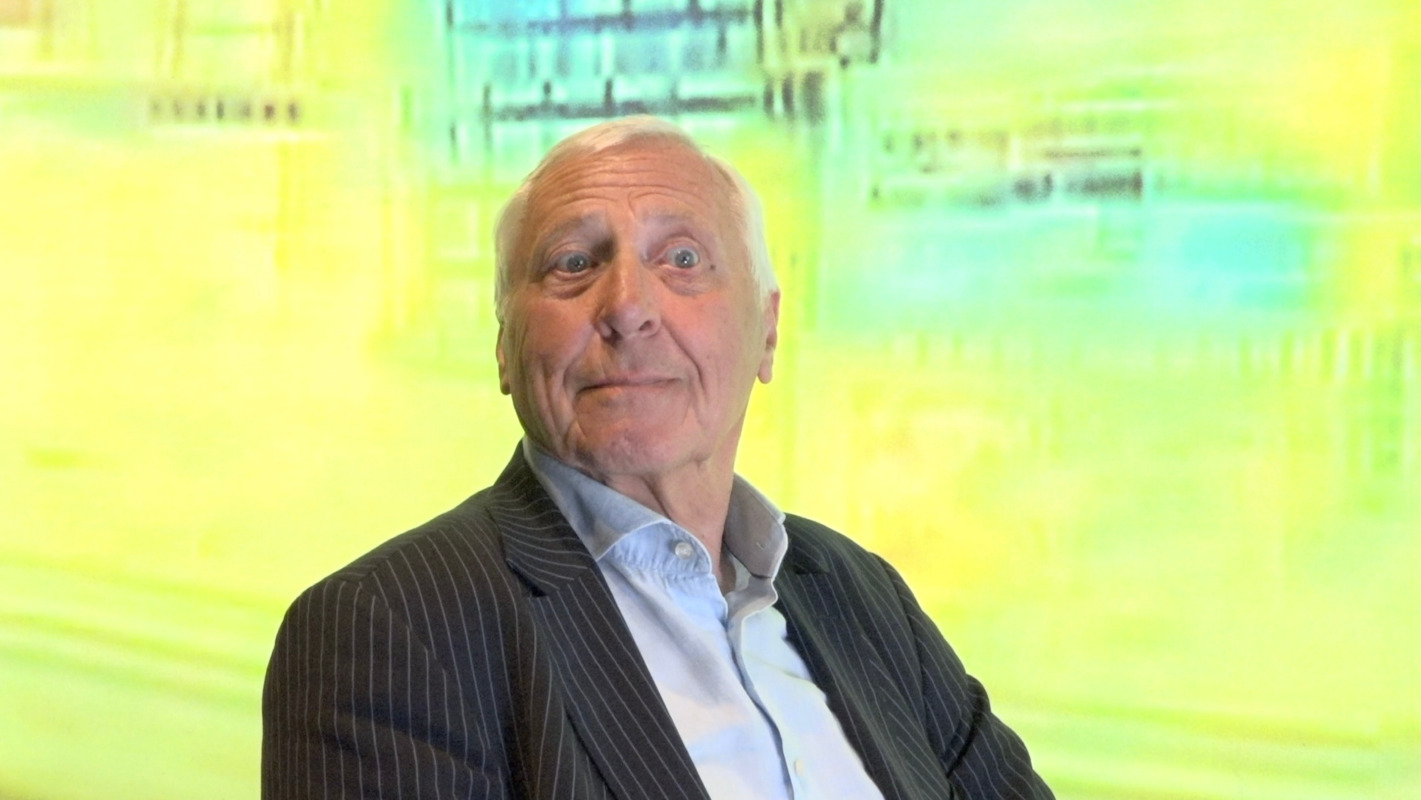 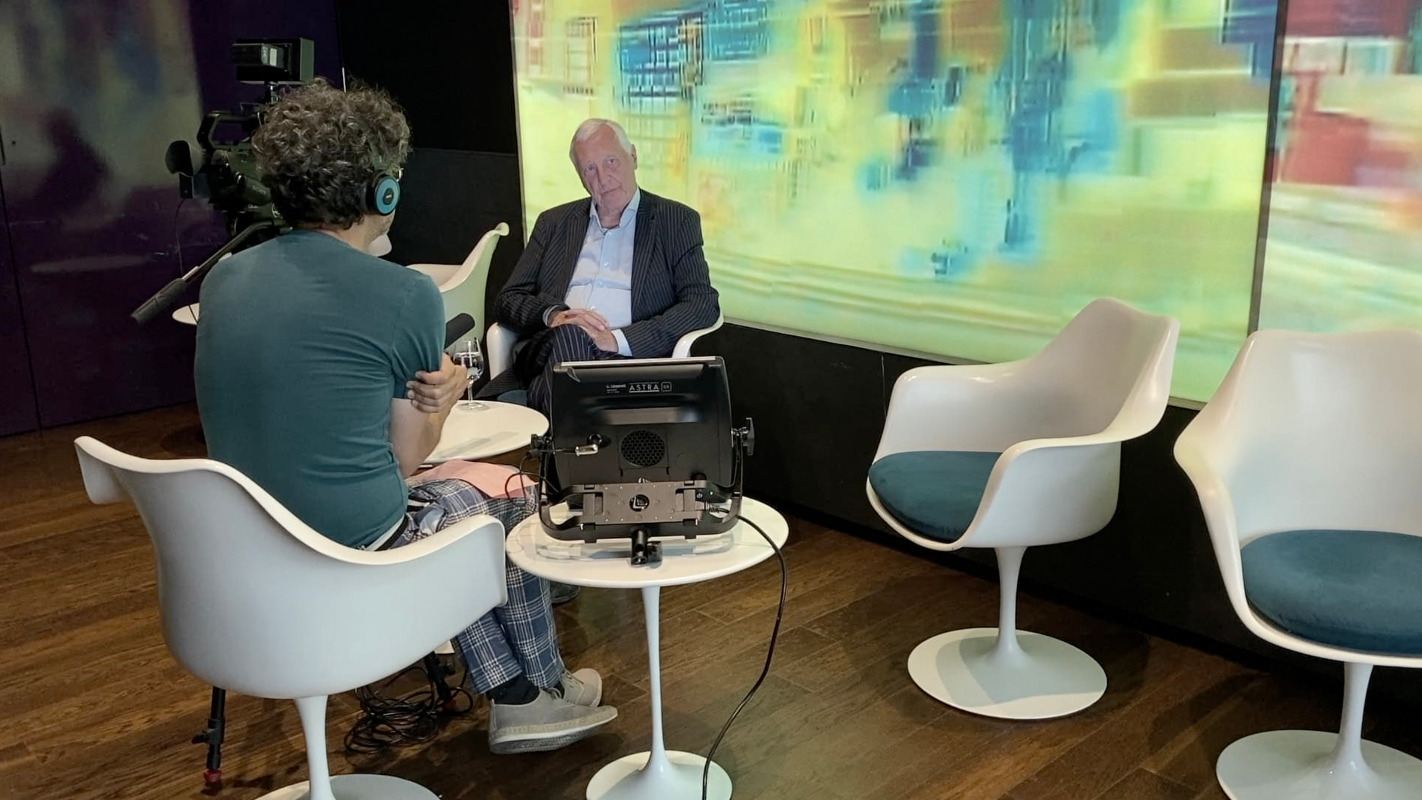 He is serious and passionate: this is what makes Michel Bodmer’s welcome at the Zurich Filmpodium so charming. While waiting for the taxi that will deliver us an even more charming Peter Greenaway, an equally passionate and rather humorous young octogenarian, we speak about his strong plea against text-based cinema, that is his advocacy for a “cinema-cinema”. Thus I discover that, according to Michel (who translated some scripts of Greenaway), he is also an excellent writer. Yes, the problem is not whether a film is actually preceded by a detailed script or not, the problem – an urgent problem today! – is the general conception of a film as reduced to storytelling and linear narrative. Later, during the interview, Greenaway’s eyes pop out when I accidentally tell him “your stories”…

Ruth Baettig prepared the interview with me and we agreed on asking him what triggers his filmmaking – if not a story, is it a vision? Not ..., he would not use a term that could even vaguely refer to religion. Greenaway tells us a long story (a story, yes) about his youth, in order to explain to us how he wanted to paint – not to be a painter – and as a painter he started and continued to make films.

But what is the painter’s palette? Where does a Greenaway project begin? Answer: with the “fascination” – his word – for particular subject matters. We learn of them from his films: maps, numbers, birds, lexicons, for example and, more generally: water, sex, and death. He speaks of “fascination”; as viewer of his films, I would speak of obsessions, for there is something slightly maniacal in how his beloved subject matters saturate the space-time of the films. What is exceptional in Greenaway’s works is the radicality with which such themes are explored, a radicality that is enhanced by the aesthetic generosity provided by this “cinema painter”. When we first met in Locarno, seven years ago, his keyword was “celebration” – be it life, love, or death that we celebrate. From this perspective, even the most morbid theme will have something festive to it.

This radical festivity, or festive radicality, is what attracted me when my sister made me discover some of the short films of an “independent English filmmaker”, almost thirty years ago, and the secret rules of attraction put me now in front of him, interviewing a “piece of history” (of cinema). He is obviously disturbed by this expression, so that I quickly switch to the topic of the future of cinema… oops, actually with someone who believes that cinema is dead since decades. However, he appears to defend the idea that the show must go on, and new inspiration can come from the discovery attitude of early cinema. Again, a question of attraction? It is certainly a question of cinema as astonishment, as wonder. Something which Greenaway has pioneeringly developed also outside the black box, with installative projections and VJ performances.

Is Greenaway an experimental artist? It is what I had initially thought when watching his short films (that one should definitely take the opportunity to watch during the Zurich retrospective at Filmpodium). But if the essence of an essay is to be tentative, and the essence of a work to be accomplished, we realise that – despite his curiosity for multimediality and the new technologies to experiment with – he is not properly an essayist but a creator of works – of oeuvres. One specific feature of Greenaway’s works is that he does not only propose something to see but also creates the specific grammar to read it, the specific landscape to make it sound, he gives to us its own world – which is exactly what makes a work an oeuvre.

the fiction of encyclopaedia

During the interview, I try to propose this distinction between essay and work to him but I realise that he is not inclined to conceptual speculation. Anecdotes about the genesis of his works and, not least, the decisive vicissitudes of their production, prevail. The style of an author is not necessarily something that they have full control and knowledge of; it is more the expression of their being. What he seems to enjoy controlling however is the dose of fiction he instils in his artistic projects, and this is nothing but the best way to create a relatively independent work. Deep down, his passion for the most ambitious encyclopaedic projects, a sort of ultimate work of putting order in the world, is perfectly consistent with his passion for fiction. While he speaks of D’Alambert and Samuel Johnson I feel that, for encyclopaedists and scientists, global artists or Renaissance-like polymaths, this young octogenarian seems to have both admiration and compassion. Just as for cinema itself, recipient of both wonder and pity.

This is the bitter-sweet flavour of our conversation. It is such a pleasure to hear Greenaway meander through his biography and bump into amused and humorous parentheses. At the same time it is quite impossible to contain his flow of words within the structure of a decent question-and-answer interview. Almost in a panic, I think of Ruth’s task of editing all of this. But isn’t there exactly a specific lesson to learn? Isn’t there exactly something that speaks of Peter Greenaway in one of the best possible ways?

The question-and-answer pattern often reflects a solving the problem attitude, which is also the standard rule of cinema scripts and Hollywood dramaturgy. Now, in Greenaway’s films, he resists precisely against this approach of storytelling that aims at keeping the viewer glued to the screen. In his films, and also during the interview, it is question of digressing, going around in circles, jumping forwards and backwards, etc. Be it through the virtues of ellipses or detours, Greenaway’s language resembles the one of poetry, the one that gives plenty of freedom to the viewer/hearer/reader. Nevertheless, contrary to any minimalist strategy, his specific gesture is that this freedom is constantly accompanied by a sort of aesthetic saturation. Looking at his films, and now interviewing him, I feel both completely free and overwhelmed. Would this be the ultimate secret of his charm?

More Info on the Retrospective at Filmpodium Zürich 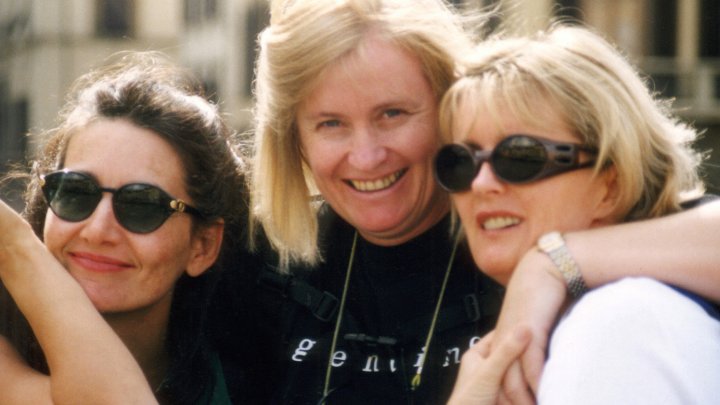 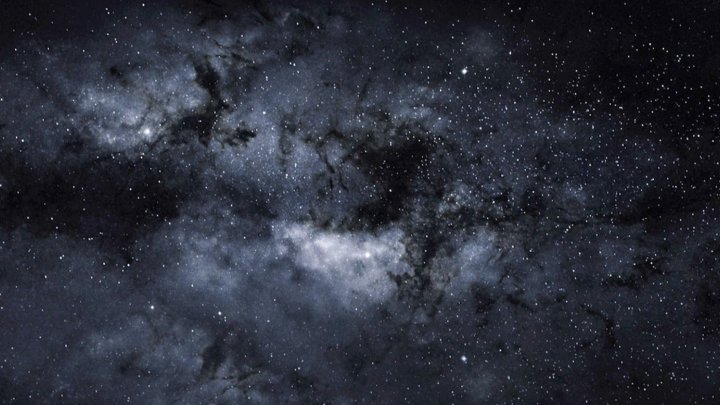 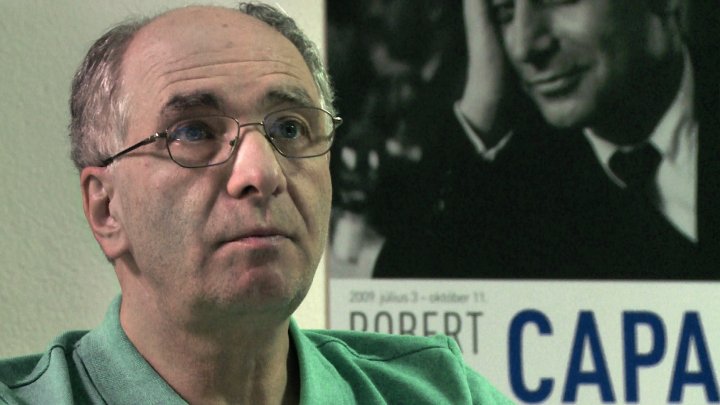