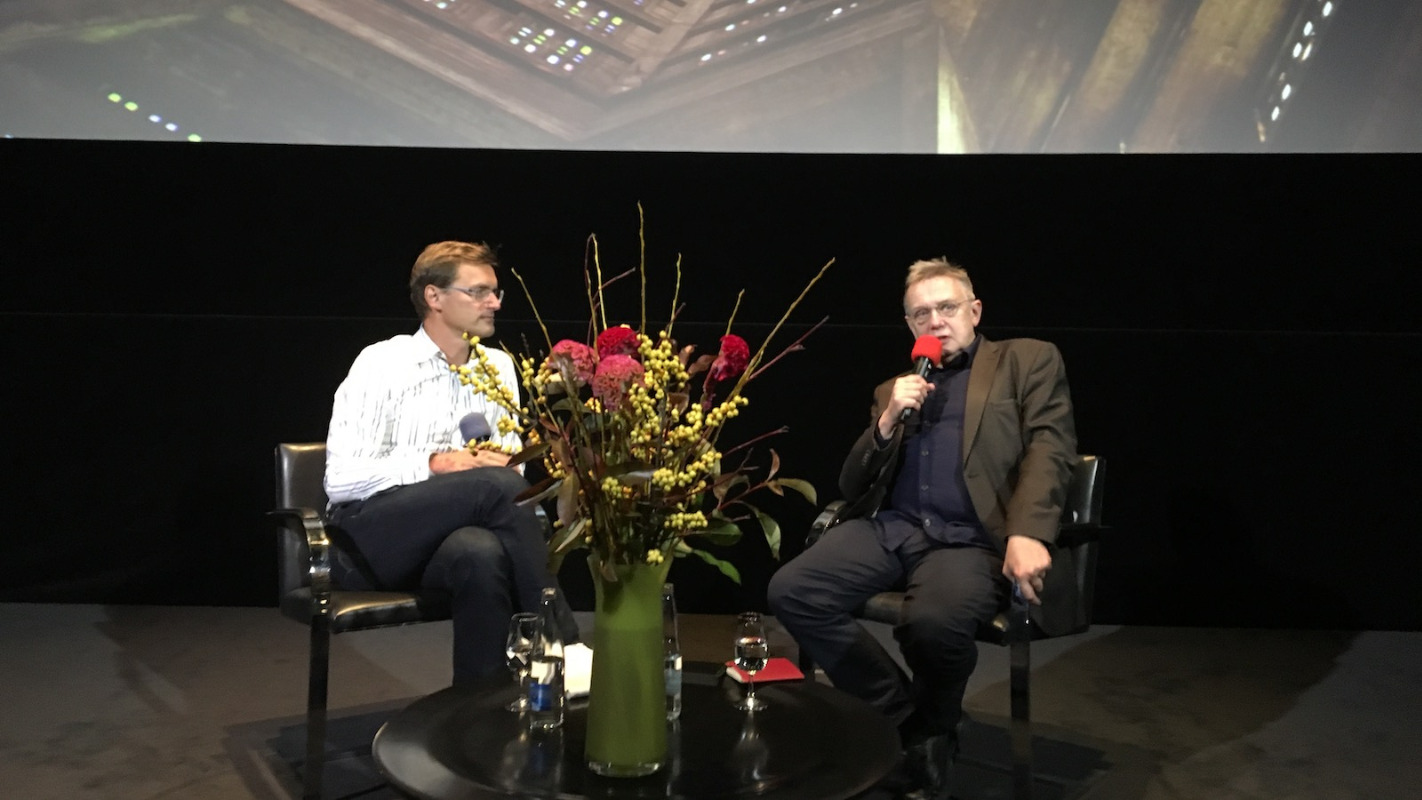 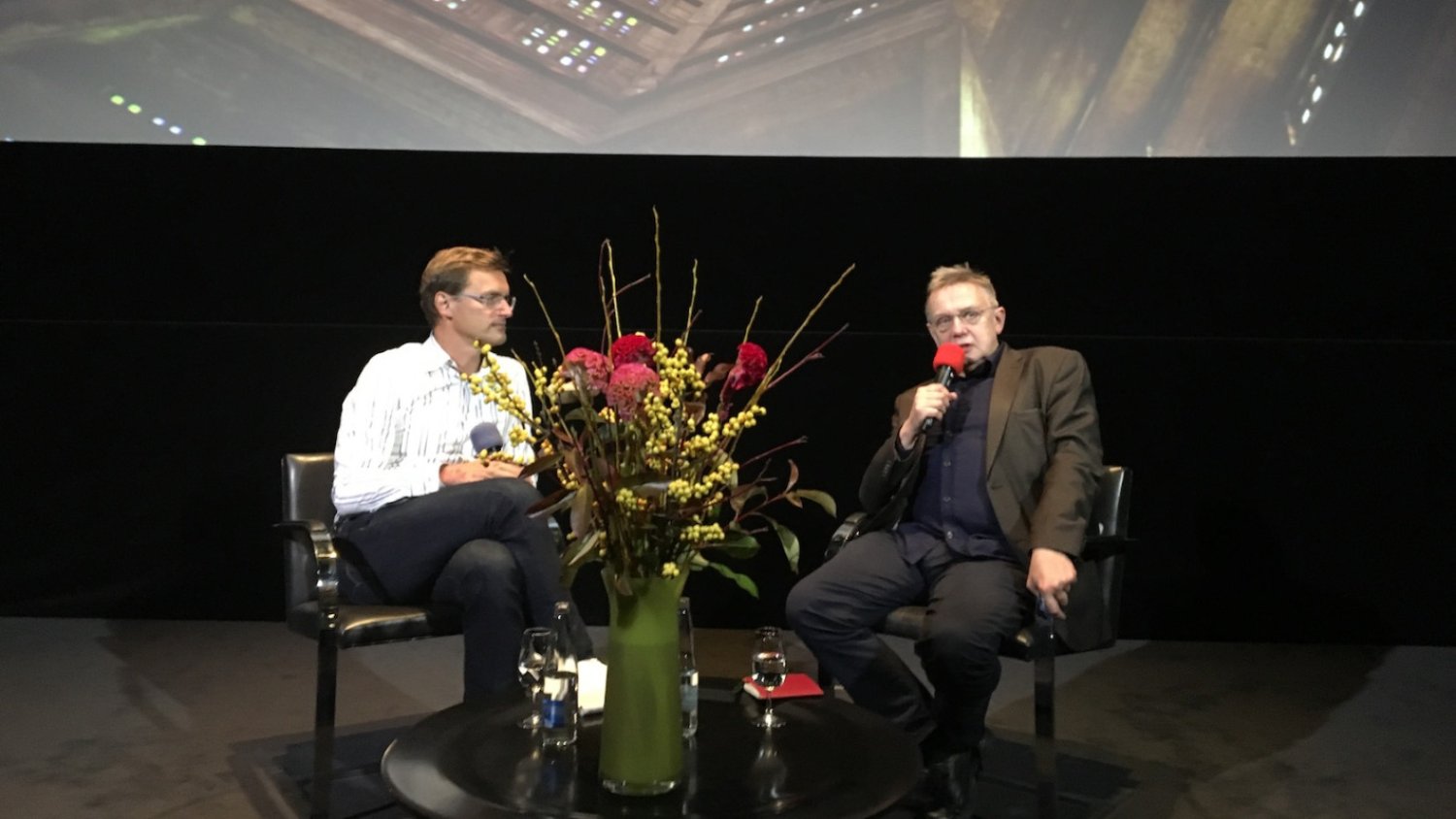 […] Cinema is not an instrument that is meant to stage architecture outside of its original context; cinema, and the cinematic grammar, have to conform to what a work of architecture itself stages.

[…] The attachment to the reality of architecture and to the construction of its cinematic expression is what drives his filmmaking.

[…] This systematic inclination of the framing produces an emphasis on the bi-dimensionality, on the surface: we could find a “modernist” influence in Emigholz’s aesthetics with Clement Greenberg’s infamous reflection on “flatness” as a modernist device against the illusionism of the representation.

[…] The “made-of” of Tbilisi’s ruins and the “making-of” of Kreidler’s compositions join together as they are both contexts for a composition or decomposition of elements that are perceived as sheer signs. 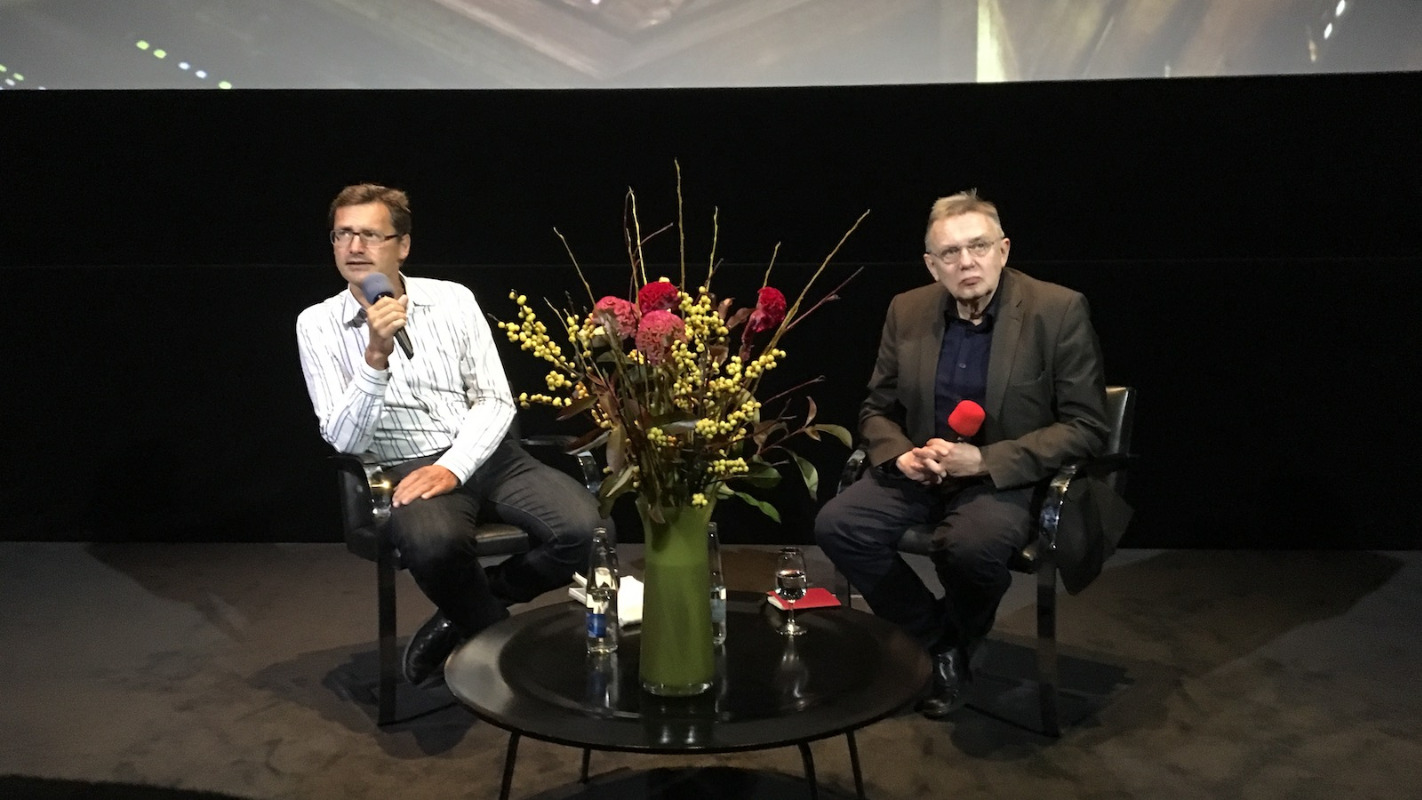 It was my first time watching one of Heinz Emigholz’s films, but not the first time I discovered how closely related the worlds of cinema and architecture are to one another. At the Stadtkino Basel, the first screening of Schindlers Häuser (2007) was introduced by the film scholar Johannes Binotto, who recalled Dziga Vertov’s conception of cinema as a “builder” of architecture. For Heinz Emigholz, cinema has a particular privilege in its ability to really speak about architecture and architects when it loses the pretention of depicting or representing architecture through polished, artificial images. Cinema is not an instrument that is meant to stage architecture outside of its original context; cinema, and the cinematic grammar, have to conform to what a work of architecture itself stages. There is only one staging, one configuration of a space: the one created by an architect, which the camera has to endorse. The importance of speaking about the real conditions of architecture and its context is the other key that Binotto has given us in order to enter Emigholz’s cinematic aesthetics. One could use the notion of “configuration” in order to understand Emigholz’s perception of a work of architecture as something that is not reduced to a designed and ideal object. But the configurations – or net of connections –, through which we view architecture, do not directly involve any other narratives than the ones that are told by the geometry and the space itself.

The absence of comments or interviews is the peculiarity and force of Emigholz’s filming architecture; his filmic language especially stresses the composition of the image and sound. In Schindlers Häuser, the sound is live-recorded but it is not synchronised with the images: this shows us how the German filmmaker is both a realist and a constructivist, insofar as, in general, even for the treatment of the images, the attachment to the reality of architecture and to the construction of its cinematic expression is what drives his filmmaking.

But, there is one more feature of his method of composing the image that strikes our attention: the use of a systematically slanting frame. In his words at the meeting in Basel, the reason for this solution lies in his desire to show the architecture as we effectively see it. Notwithstanding this realist or subjectivist intention, the experience I had as spectator lead me to focus my attention more on the abstract dimension of the image: I became more sensitive to lines and volumes, to the matter of surfaces, and to many details. This systematic inclination of the framing produces an emphasis on the bi-dimensionality, on the surface: we could find a “modernist” influence in Emigholz’s aesthetics with Clement Greenberg’s infamous reflection on “flatness” as a modernist device against the illusionism of the representation.

A visibility beyond functionalism

Now, this kind of Modernism must be clearly distinguished from the (equally modernist) Functionalism that has dominated a great part of Twentieth century architecture. If the functionalist conception can be considered as an exercise of invisibility – the structure is not there to be seen but to serve its users –, Emigholz’s skewed perspective makes the structure a space of contemplation, and his films are an exercise of visibility, or of making (the architecture) visible. In this respect, Rudolph Schindler’s use of the functionalist style as an aesthetic and almost decorative element of his playful constructions (which would be an absurdity for any rigorous functionalist), is incredibly close to Emigholz’s cinematic gesture of making architecture visible. For both of them, it is always a question of vision: vision of the space, vision of architecture and of an architecture that is there (also) to be seen.

But, the contemplative pleasure in Schindlers Häuser is also constantly hindered by another rule Emigholz very rigorously follows in his cinematic composition: his shots are all between 5 and 7 seconds. Even if each frame would push us to wander into it and discover details, connections, even stories, the imposed rhythm obliges us to read the images transversally, through their relationships, independently of the richness of each frame. The frustration of an impeded contemplation should be replaced by the biographical narration concerning the architect, insofar as we chronologically follow the historical evolution of Schindler’s houses. Architecture as autobiography: this is a beloved theme in Emigholz’s cinema. He focuses on architecture insofar as it is primarily considered as the work of an architect and an expression of his/her life path.

I leave the viewing of Schindlers Häuser with the curiosity of better understanding Emigholz’s cinema: Has its style of filming been largely influenced by Rudolph Schindler or has he chosen Schindler’s path as an architect because it particularly suits his own visions as a filmmaker? The screening of the more recent 2+2=22 [The Alphabeth] (2017) is the perfect occasion to confirm how, even going beyond the constraints of remaining exclusively focused on architecture, aspects like filming the gaze on architecture, filming the space in its net of connections, composing images and sounds, making the space visible, narrating a biographical evolution, all definitely remain important directions in his cinema. In 2+2=22, Emigholz adds the word – through the images of his own notebook and a text read aloud – and the sound – through the filming of the process of music composition by the electronic group Kreidler – to the architecture and the urbanism, through a sort of portrait of Tbilisi. A complex mosaic of elements, which highlight the ideas of connection and network, which are explicitly proposed as a main theme for the film.

Free semiotics of the made-of and the making-of

Here Emigholz exhibits the grammar of space, sound, and words, and composes with it. There is an inverted-mirror play between the architecture of Tbilisi, as a chaotic superposition of ruins that tells many stories and shows a variety of histories, and the creation of sounds by Kreidler in the aseptic closed space of a recording studio – the text layer functioning as a bridge between them, itself presented in the form of a collage. The “made-of” of Tbilisi’s ruins and the “making-of” of Kreidler’s compositions join together as they are both contexts for a composition or decomposition of elements that are perceived as sheer signs. “2+2=22” means that “2” is considered not as a number or as a sign that has a function, but as a sheer sign without a precise function. Emigholz invites us to “see” 2 – as well as houses, spaces, sounds, words – as a sign (or signs) that can be freely combined independently of its (or their) meaning(s). This is the exercise of visibility, or of making something visible, in his cinema. 2+2=22 is a reflection on semiotics; and this emerges powerfully as a more precise refinement of what seemed to me to be the tendency towards abstraction or towards a certain flatness beyond the dogmas of functionalism in Schindlers Häuser.

An exercise of visibility – or audibility. For the retrospective on Heinz Emigholz, the Stadtkino Basel and Kaserne Basel have invited the group Kreidler for a concert. It was the perfect occasion to test Emigholz’s aesthetics through music. And we could say that they give not only to the ears, but to the entire body, what the flatness has given to the Avant-garde painting, or what skew framing has given to Emigholz’s cinema: a form of concentration on the basic elements themselves (sounds and rhythms for Kreidler), in their free combinations and their ability to compose new configurations independently of already established languages and meanings. 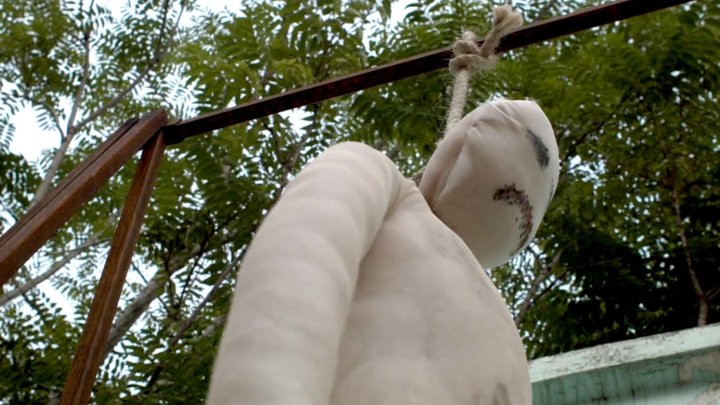 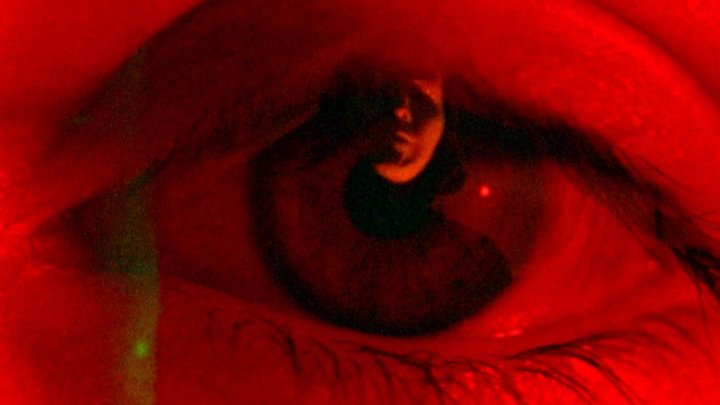 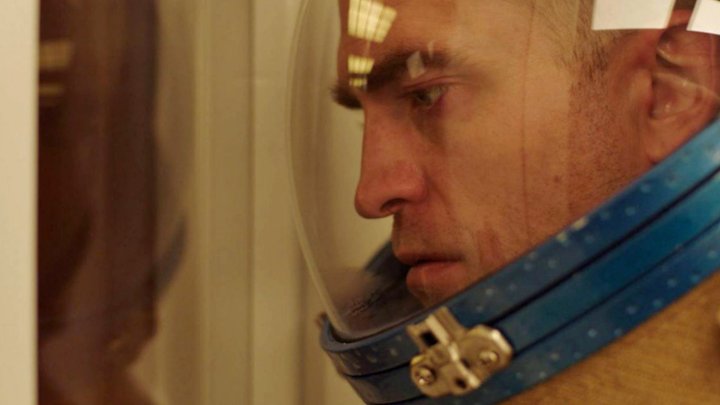